Popular amongst local honeymooners as a secluded romantic getaway spot and white water rafting enthusiasts from around the world, Belihul Oya is a picturesque little hamlet in the Southern hills of Sri Lanka, around 160 km from Colombo.

The location is a climatically transitional area, linking both the dry and wet zones and the hill and low country at an altitude of less than 1500m. As such, it is one of the richest bio-diversity spots in Sri Lanka with the vegetation consisting of moist semi-evergreen forests, tropical savanna forests, dry patana grasslands and montane temperate forests. The diverse fauna and flora found here also makes it the perfect location for nature lovers. A gushing river – from which the town gets its name, flows through with enough exciting rapids to entice serious paddlers and the area is also home to several impressive cascades including Sri Lanka’s highest waterfall - Bambarakanda Ella (also known as Bambarakele Ella) which at 263 m (863 ft) in height ranks as the 299th highest waterfall in the world.

Bambarakanda is the highest waterfall in Sri Lanka with a sheer drop of 263 meters (863 ft), it ranks as the 299th tallest waterfall in the world. Also known as the Bambarakele Falls, it is situated in the Badulla District among an evergreen forest of pine trees in the Kalupahana Area.

This is not a wide waterfall but drops as a thin line from a rocky outcrop. The fall is formed by the Uduweriya Haputale mountain and Kuda Oya, a tributary of Walawe River.

It’s mentioned that the dewalaya was built in the year 1382.AD as the Medagama Kataragama devalaya and after 200 years in the year 1582 the current building complex had been built. It is said that King Rajasingha The first built the dewalaya complex in 10 months. The dewalaya has the Hindu traditions as well as the Buddhist worship of a dagoba a Bo-tree and a shrine hall (Viharaya).

On Non Poya days the devalaya functions on Hindu Traditional pooja system. Saturday, Wednesday and Monday they engage in Buddhist worship at the Shrine and Bodhi Tree and other days at the Kataragama devalaya.

The ancient Bolthumba dewalaya is dedicated to the mythical King Rawana, whose official flag is said to be still in it. Legend has it that it rains when the flag is taken out!

Situated 10km from Belihuloya, near the Brampton Tea Estate (at the 106th mile post) the 6m-high Brampton Falls is set amongst tropical jungle and flows to the Walawe River. It derives its water from the eastern slopes of Mt Papulugala (1530m), and is a tributary of Weli Oya forming several cascades among huge trees of the surrounding monsoon forest.

This trail takes approximately 2½ hours. It goes through moist semi-evergreen forest and dry "pathana" grasslands. It is possible to see a lot of birds and other fauna and flora during this trail. The route leads about 200m towards Colombo, turning off and climbing up the road to the Hermitage about 500m. Entering the forest bordering the hermitage, climb up further through the forest about 1km and come to the pathana area. To take a different route back through the forest go through the village to the main road from where the trail ends.

This is a lovely half-day hike (approximately five hours). The trail leads through the village for about 1km, through a forest reserve for a short distance before reaching the point where the Belihuloya River falls into the Samanalawewa reservoir. It then leads up along the river passing two small waterfalls and a cave for about 1½ km before entering the village and through the same 3km back.

Galagama Ella Falls (Kathi Gahana Ella) waterfall lies few kilometers down the Bakers Falls on the Belihul Oya stream. This is accessible through Horton Plains route or on a tougher hike from Belihuloya. This 150m-high (500ft) waterfall lies in a deep valley in Belihuloya covered with large slippery rocks. To reach this, one has to travel up to Ihalagalagama along a small motorable road for about 5km and walk about 6 km through paddy fields and scrub jungle.

The name Pahanthuda is derived from the Sinhala word “pahana” for lamp. Pahanthuda means the wick (of a lamp), the fall is named for its shape of the base of the pool which resembles the shape of a clay lamp, and the waterfall resemblence of that of the wick of the lamp. Pahanthuda fall, is about 5 metres (15 ft) in height is located approximately 1.5 kilometres (0.93 mi) from Belihuloya.

This 30m-high Papulagala Fall is located in the Brampton Estate (Tea Plantation) on the slopes of Mt. Papulagala. The stream then flows via Uggallkaltota to the Walawe River. During the rains a brook forms this waterfall, which is about 30 metres (98 ft) high. It is located 5 kilometres (3.1 mi) east of Belihuoya at Lower Hiralouvah, a steep winding road leads to Upper Hiralouvah through the Brampton Estate. This part of the estate is bordered in the north by a rock range flanked by Mt. Papulagala.

Surathalie Falls, named after a film that was shot in the area, originates from the Sri Pada Reserve's Ellamana mountain range (948m), the fall is created by the Kadawath River, which flows along Sabaragamuwa Uva and later into the Weli River. It is bordered by an untouched wildlife sanctuary. Surathali Falls is 60m in height, 2m wide and made up of three segments.

Approximately 2½ hours walk from Belihuloya, this area consists of moist semi evergreen forest and dry "pathana" grasslands. One can get an incredible view at the top of the mountain. The trail goes about 400m towards Badulla, along the Ihalalagama road for about 5km, turning off at Landuyaya, walk through an abandoned tea plantation for about 200m, through a pathana for 2km to the summit and back the same way. 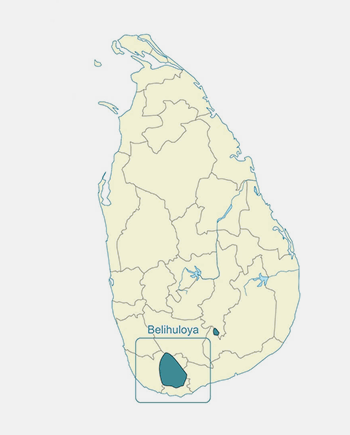