One of the hill country’s most appealing destinations best known for some of the finest views in Sri Lanka, Ella is a small town of a pleasantly temperate climate surrounded by idyllic green hills.

The main attraction of Ella is the breath-taking view from the ‘Ella Gap’ – looking out between the towering bulk of Ella Rock on the right and through a gap in the hills to the plains far, far below. While the village itself may not offer much in the way of attractions the locality certainly makes up for it. The majestic Ella rock looming over the village provides an arduous but rewarding hike – and the views from the top are well worth the effort. The beautiful Ravana Ella waterfall is an impressive cascade – the widest in Sri Lanka, is also a sight not to miss. The nearby caves are steeped in legend according to which, the ancient king Ravana held the Indian princess Sita captive in them.

Travelling from Ella on the Wellawaya road, a little sign board marks the turn off to the Sita Cave, thought-about to be the abode of the princess in the Ramayana. The legend of the epic battle between Rama and Ravana goes that the Lankan King took his royal captive and fled to the Uva region from his capital of Ravana Kotte believed to be somewhere close to modern-day Nuwara Eliya, once Rama invaded the island alongside his army. Here, it's aforesaid that princess Sita was kept captive in a cave. These days that cave could be visited when after hike of around five hundred meters.The cave itself has little or no proof of the royal captive it's stories of imprisoned. But there has been a trifle archaeological work applied at this place. Just as an alternative caves with similar vibrant legends have disclosed way more scientifically vital data concerning early human habitation of the country, the Sita cave could be such a treasure trove provided that it's geologically a medium sized structure which might have been simply capable of sheltering many dozen primitive humans, long before the arrival of Sita. There could be very little sign of Sita within its dark hollows, however the cave named for the Indian princess offers a beautiful hike through bush forests with some nice views of the Ella Gorge on one of its precipices.

At 240m, the Bambarakanda Falls are the highest in Sri Lanka. March and April are the most effective months for viewing the falls, however any visit after significant rainfall ought to be worthy. At different times the water could also be reduced to a dissatisfactory trickle. From close to the falls a challenging four-hour path runs to Horton Plains. The falls are about 11km from Belihul Oya towards Haputale, close to Kalupahana. 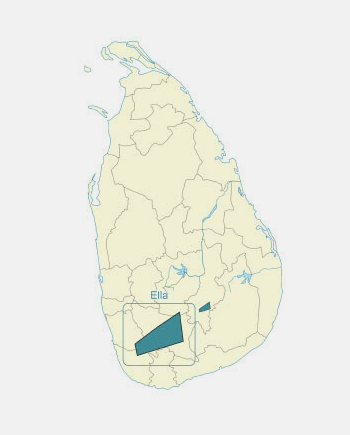