The new hub of ‘cool’ and creative activity in Sri Lanka, the Southern capital of Galle is enjoying a great comeback.

Galle and its outskirts have now become a favoured hotspot for travellers looking for an all-round holiday. The main attraction of Galle is the 17C Dutch Fort, a UNESCO protected World Heritage site. Historically, Galle was a location of paramount importance due to its strategic location on the South coast as well as its natural harbour. The centre of ancient trade in gems, pearls, spices and more Galle was the port of call for many seekers of tropical treasure. In 1505, the Portuguese fleet of Lorenzo de Almeida steered off course and landed there by accident – the rest is indeed history, as this marked the end of an era for the nation. The Portuguese were ousted by the Dutch in 1640; and the Dutch were in turn ejected by the British in 1796. Each, however, left their own legacies in the culture and landscape of the town, the remnants of which can still be seen. Today, Galle is a heady blend of culture, race and lifestyles - a thriving epicentre of rich heritage, beautiful beaches and laid back pace of life.

The Galle Fort is located on the south west coast of Sri Lanka on a small rocky peninsular in the town of Galle. A Fort was initially established by the Portuguese in 1588, but was later fortified into the solid structure seen today by the Dutch during the 17th century. Also known as the Galle Ramparts, the Galle Fort is a historically and archaeological rich site which was recognized by UNESCO as a World Heritage Site in 1988. This architectural triumph was so well built that it was able to withstand the Boxing Day Tsunami of 2004 which unleashed its fury on the coastal area of Galle, destroying many modern buildings and structures.

The Galle Fort has a glorious history and a strong Dutch influence can be seen throughout the Fort. Today you will find a population that is multi-ethnic and multi-religious that has converged to live together peacefully in this historical town. Visitors can embark on a guided tour or simply stroll through the narrow streets and discover for themselves all that the Fort has to offer. There are a variety of cafes, fashion outlets, jewellery stores, interior design shops and many other little nooks and crannies that make for an excellent day of exploring. Don’t forget to walk on the ramparts and take in the glorious view of Galle Harbour and the spectacular Indian Ocean in all her glory. The former Dutch Governor’s residence has now been transformed into the luxurious Amangalla Hotel.

The Galle Lighthouse is an onshore lighthouse located in the historical southern town of Galle. Dating back to 1848, this is the oldest lighthouse station in the country. However, the original lighthouse which was built by the British and was almost 80ft tall was located 100m away from the current location and was destroyed during a fire in 1934. The lighthouse that currently stands was constructed in 1939 and is 87ft tall. Located within the walls of the historical Galle Fort, the Galle Lighthouse is strategically positioned at the Southern end of the promontory giving it the best possible view of any ships entering the Galle Harbour. This location is known as Point Utrecht Bastion and the lighthouse has been constructed 20ft above the road level of the ramparts.

Situated on Sri Lanka’s southern coastal belt, Galle is a large bustling town which will offer you an experience like no other. Located just 125km south of Colombo, the city is easily accessible via the new Southern highway. For a more scenic journey, although considerably longer, you can travel to Galle via Galle Road and really soak up the sights and sounds of the beautiful southern coastal belt.

Undoubtedly one of the most popular destinations amongst locals and tourist, Galle offers it all – fabulous beaches, historical buildings, an amazing culture, delicious food, whale and dolphin watching excursions and a variety of accommodation options to cater to everyone’s pockets. Whether it is luxurious boutique style accommodation or simpler bed and breakfast options, Galle has it all. With its spectacular Galle Fort, which is a UNESCO World Heritage site, this town was the country’s earliest European administrative centre as well as the island’s major port for many years. The old and the new blend in a timeless manner enabling the town of Galle to offer you an ambience quite unlike anything you’ve experience anywhere else in the world.

Fast gaining a reputation for being the country’s artistic centre, Galle is a haven for artists, writers, poets, photographers, designers and generally anyone seeking a bit of inspiration. In recent years the Galle Literary Festival has attracted a host of acclaimed local and foreign authors further adding to the town’s growing reputation for being a hub for artistic activity. The best way to experience all that Galle has to offer is on foot, thus giving you the opportunity to truly take in the many unique sights and sounds at your leisure.

Opened in 2010 The National Maritime Archaeology Museum is situated within the sturdy walls of the Galle Fort. The first of its kind in Sri Lanka, it was established in a Dutch warehouse dating back to 1671. The Maritime Museum was initially opened to the public in 1992. However although the historical building in which the museum was housed in was able to withstand the brute force of the 2004 Boxing Day Tsunami, the exhibits were destroyed due to the ensuing flood. Furthermore, a great deal of maritime archaeological artefacts were destroyed and lost.

With financial assistance provided by the Kingdom of Netherlands, the original Dutch warehouse was renovated and a new museum with dual access has since been established. The new National Maritime Archaeology Museum contains exhibits of marine artefacts found during underwater exploration. Exhibits include maps, naval crafts, ropes, artillery guns and even sailors shoes. Some of these artefacts are close upon 800 years old and have been recovered from shipwrecks off the Southern coast of the island.

The Dutch Reformed Church within the historical Galle Fort is a religious monument with great historical value. The present church was built in 1754 as a thank-offering for the birth of a son by Gertruda Adrianna Le Grand, who was the wife of Commandeur Gasparus de Jong. The church was built on the site of a Portuguese Capuchin Convent and on an earlier Protestant, “Groote Kerk”, built in 1640. In 2008, the church changed its name to the Christian Reformed Church in Sri Lanka with the interest of increasing and widening church membership.

When you enter the church you are overcome by a great sense of history. There are engraved tombstones on the floor and an orthodox pulpit which is one of the most excellent specimens found in any place of Christian worship in Sri Lanka today. Underneath the platform of the pulpit is a fine carving in “pomegranate pattern”. The organ loft is said to have once held an extremely large Dutch organ. Exploring this historical site is a definite must for anyone visiting the Galle Fort.

Located on a secluded strip of beach in Unawatuna, which is a suburb of Galle, is a magical place called Jungle Beach where you will find a relatively unharmed beach. As it is difficult to approach due to its rugged terrain and thick jungle, Jungle Beach has thus far managed to hold on to its natural beauty. You can access Jungle Beach from near the Peace Pagoda where you will find some steps cut down the hill. The beach is small and often not too crowded and the sea in the area is usually not too rough for swimming.

The Rumassala Mountain is a fascinating place which has been the subject of many legends over the years. It is thought to feature in the legendary tale of Ramayana where Hanuman, the monkey god, was sent to the Himalayan Mountains to retrieve a medicinal plant to help heal the wounded Lakshman. Unable to identify the plant correctly, Hanuman is said to have brought the whole mountain on which the medicinal plant in question grew. Rumassala was said to have been created when he dropped a piece of this Himalayan Mountain. Strangely enough Rumassala Mountain is renowned for its abundance of rare medicinal plants.

Rumassala Mountain is rich in biodiversity and is home to many endemic birds. The surrounding coral reefs are home to a myriad of aquatic life as well as shipwrecks, thus making it a diver’s paradise. Accommodation options are available in Galle or at nearby Unawatuna at a range of prices. 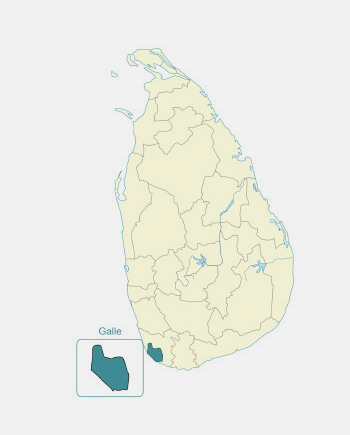