A truly unique natural wonder, Horton Plains National Park is a protected reserve of montane grassland and cloud forest in the central highlands at an altitude of 2,100–2,300 metres (6,900–7,500 ft), located around 28km from Nuwara Eliya in the central hills.

The highest plateau in Sri Lanka it ends dramatically with a sheer drop of 870 m (2,854 ft) called World’s End, which offers most spectacular views on a clear day. The reserve is a biodiversity hotspot with many endemics; myriad bird species, herds of Sambur deer, bear monkeys and the elusive leopard. While the plains can be explored by jeep, it should ideally be seen on foot – and best visited early morning as the mist tends to fall by lunchtime. Sri Lanka’s second and third highest peaks, Kirigalpotha (2,395m) and Thotupola Kanda (2,357m) are also found here and three major rivers of Sri Lanka – Mahaweli, Kelani and Walawe also begin their journey here, and cascading waterfalls, especially Baker’s Falls is a must see.

World’s End is situated in the Horton Plains National Park, which is the only national park in Sri Lanka where visitors are allowed to walk on designated trails unaccompanied. World’s End itself is a sheer cliff which drops almost 4000ft allowing for a breathtaking view of the world below. On a clear day vistors can expect to see mountains, tea estates and even the coastal area in the distance. It is claimed that on extremely clear days the Indian Ocean which is almost 81km away is clearly visible. However, the mist usually comes in around 9am or so, is it best to try and reach World’s End by around 7am.

World’s End is located approximately 4km from the entrance of the park but the trail takes a circular route which makes the complete journey a 9.5km hike. World’s End has two parts, names Small World’s End and Big World’s End, which are approximately 1km apart from each other. It is best to avoid Sundays and Public holidays as these days tend to get extremely crowded which doesn’t allow for soaking up the true atmosphere of the area.

Visitors to the Horton Plains National Park must be sure to visit Baker’s Falls, which is a mystical waterfall situated amidst the rugged beauty of surrounding grasslands. The waterfall is a tributary of the Belihul Oya which drops almost 20m in a spectacular manner. The falls was named after the famous British explorer and naturalist Sir Samuel Baker who spent a significant period of time in the then Ceylon where he founded an agricultural settlement in the nearby town of Nuwara Eliya. Baker’s Falls is not a single waterfall but consists of several parts and is located along the circular hiking pathway on the return from World’s End. Alternately, visitors can visit Baker’s Falls directly which is 3km from the entrance of the park. Visitors must ensure they remain on the allotted walking pathways at all times as it is not unusual for the mist to come in quite suddenly. 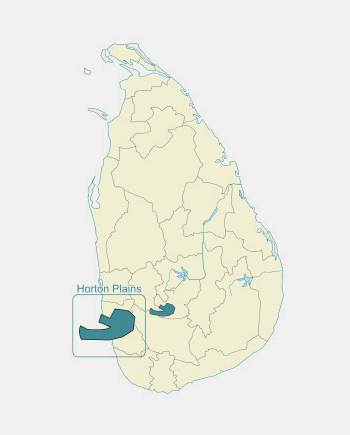