One of the west coast’s largest settlements, the bustling town of Kalutara has many attractions apart from the long stretches of beach.

The town is set beside a broad estuary off the Kalu Ganga (The Black River) from which the region gets its name. Controlled at various times by the Portuguese, Dutch and British, it was once an important location as a spice trading centre, and famed amongst the locals for its luscious Mangosteens. Today, it is better known for the imposing Buddhist stupa – the world’s only hollow shrine, to which devotees flock from around the island; and travellers stop by to give offerings and invoke blessings for a safe journey. The remains of Kalutara’s grand colonial past is apparent in the many stately old homes along the roadside – the finest of which is the Richmond Castle – a grand mansion displaying an eclectic mix of architectural styles.

The Kalutara Bodhiya is one of the most famous sacred and historic symbols of Buddhism in Kalutara Sri lanka and is probably the most visited temple in Sri Lanka. It is believed that the Bōdhi Tree at Kalutara from one of the 32 saplings of the Jaya Sri Maha Bōdhi (The Great Resplendent Fig Tree Symbolising Victory) in Anuradhapura, which itself is a sapling of the very Bōdhi Tree (Ficus religiosa) in Bihar, in Madhya Pradesh, India. It is underneath this tree that the Buddha attained enlightenment.

Travellers can get in to the boat from Balapitiya and do a trawl to a small river retreat explore an un-spoilt surrounding of a traditional fishing ground for centuries which boasts a healthy stock of many popular varieties of fish like Barramundi, Mangrove Jack, Bull eyed Mackerel, smaller Travilly and Barracudas. It is full of mangroves giving rise to a rich diversity in aquatic fauna and flora.

For this type of fishing, dead bait is the most popular. Except for the Mahseer which is considered a game fish, most of the other species such as Carp and Snapper feed on live and dead bait.

The Fa Hien Caves - more commonly known as the Pahiyangala Caves amongst locals - are a series of ancient caves which were inhabited by prehistoric cavemen over 37,000 years ago. Located in Kalutara, the Fa Hien Caves are believed to be Asia's oldest prehistoric human settlement as well as the largest natural rock structure in the continent. According to a village legend, the caves are named after the Buddhist monk Faxian who had visited the cave over 1595 years ago. However, there is no archeological or historical evidence to support this legend. Positioned at an elevation of around 400 feet above sea level, the cave reaches a height of over 175 feet and measures over 200 feet in length. It features several natural tunnels that run through the cave, dividing it into four main sections.

The rock itself is nestled amidst 75 acres of lush jungle area home to a wealth of flora and fauna - including several species of rare orchids and endemic birds and butterflies. A visit to the Fa Hien Caves is highly recommended for travellers who like history as well as a bit of adventure. 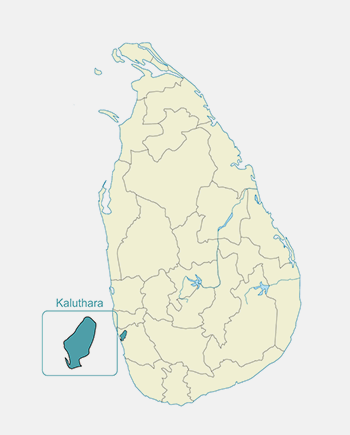