One of the three most venerated religious sites in Sri Lanka Kataragama is held sacred by Buddhists and Hindus. Muslims and Christians also visit here in hope of divine intervention.

The ancient shrine complex includes a Hindu kovil, a Buddhist temple and an Islamic mosque and it is indeed a place where races, religions, cast and creed meet to beg favour at a colourful festival. The Kataragama shrine is devoted to an eternally youthful god named Skanda – in fact, the only deity common to the indigenous Vedda people, as well as Sinhala and Tamil believers. Sri Lankans of all communities are drawn here to observe practices dating from ancient times. The passionate devotees partake in incredible rituals of painful penance, it is however, far easier to watch the traditional ‘Kawadi’ dancers whose vibrant energy and devotion is truly enthralling.

Pilgrims seek the divine intervention of God Katargama, depicted with four faces and twelve arms, to fulfil their worldly desires devoid of pain and suffering. The common sight of pilgrims smashing coconuts and carrying baskets of fruits to offer to God Kataragama during the three main poojas of the day is an anthropological study in itself, as they demonstrate their piety through lavish monetary gifts to an omnipotent god. And in the shrine room, a priest chants prayers interceding for the believers and their pleas. The main shrine room is believed to have been built in 160 BCE by King Dutugemunu in fulfilling a vow to defeat the Dravidian King Elara.

The annual Kataragama festival in July/August is another spectacle of devoutness with display of human self-mutilations such as pierced cheeks and tongues with skewers. 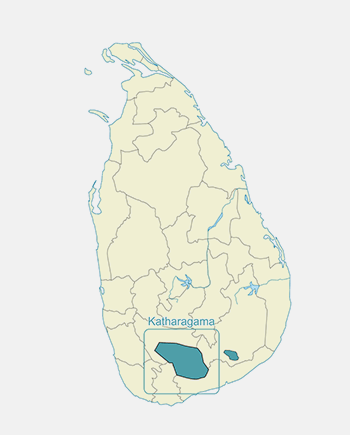