Kirinda, known as the town of wildlife, is a small port located on the south coast of Sri Lanka about 270 km from the city of Colombo and about 10km radius from the south of the ancient old religious city, Tissamaharama.

On one side its sandy streets and ramshackle buildings give way to a series of magnificently bleak and empty beaches that are perfect for long evening walks. In the other direction, tangled woodlands and sweeps of parched grasslands merge into the national parks.

Visited by many pilgrim and tourists and naturalists alike, Kirinda is a beautiful place which welcomes you all throughout the year. The ancient temple which attracts the pilgrims, is sited atop a rocky outcrop from which one can obtain magnificent views of the desolate coast with its long stretch of sand dunes and the ocean beyond. On a clear day the light house on the Great Basses reef appears like a needle in the far distance. With the atmosphere of its splendid setting aside the sea, Kirinda is the appropriate setting of one of the popular legends that constitute early Ceylon history.

Kirinda is a small village basking in the southern province of Sri Lanka. It has become one of the most venerated places of Buddhism. The beautiful beach and the temple built on the huge rock boulder on Kirinda beach are the main attractions of Kirinda.

The ancient temple which attracts the pilgrims, is sited atop a rocky outcrop from which one can obtain magnificent views of the desolate coast with its long stretch of sand dunes and the ocean beyond.

You can experience, a beautiful out look to the Indian Ocean can be enjoyed. It is believed that the Kirinda is the place where Princess Vihara maha devi landed after being set coastward. According to scholars the royal court of arms (the sun and the moon) cut on a boulder nearby, commemorates this event and marks the landing place. At Gotimbaragodaella about 2 miles inland from Kirinda are said to be the ruins of a palace where King Kavantissa officially welcomed and wed the princess. 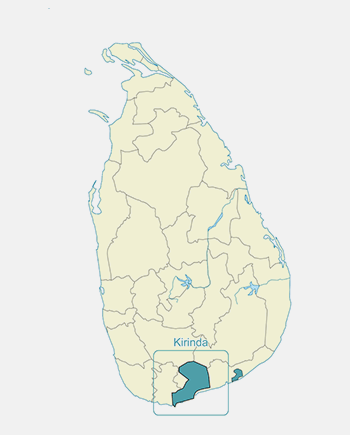