Kumana National Park in Sri Lanka is renowned for its avifauna, particularly its large flocks of migratory waterfowl and wading birds.

The park is 391 kilometres (243 mi) southeast of Colombo on Sri Lanka's southeastern coast. Kumana is contiguous with Yala National Park. Originally known as Yala East National Park, it was renamed as Kumana National Park in 2006.

A total of 255 species of birds have been recorded at Kumana. There are some20 lagoons and tanks here which are major contributors to diversity of birdlife that can be seen at Kumana, most of which are water and wading species. These tanks can be less than 2 metres deep and are often flooded by seawater. The Kumana Bird Sanctuary, within the boundary of Kumana National Park, was declared a protected area in 1938, and is rated as one of the most important breeding grounds for birds in Sri Lanka.

Kumana is also home to some of the mammals found in the neighbouring Yala National Park such as elephants and leopards which can also be seen on safari. 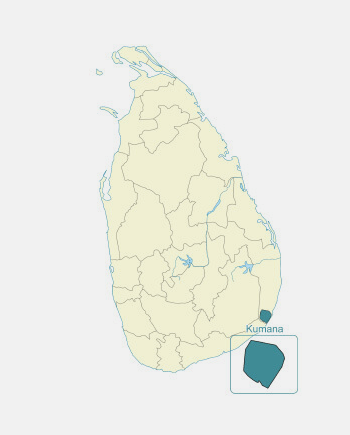