Kurunegala is the capital city of the North Western Province, Sri Lanka, and the Kurunegala District.

Kurunegala was also an ancient royal capital for 50 years, from the end of the 13th century to the start of the 14th century.

Located at an altitude of 116 meters above sea level, Kurunegala is surrounded by coconut plantations and rubber estates. There are eight very noticeable large rocks that encircle and dominate the city. Kurunegala's rocks rise from the plain below and have characteristic names, six of which come from the animals that they are imagined to represent. The largest among them is Ethagala or the "Elephant Rock", reaches 325 meters. The shape of Ethagala resembles an Elephant.

Kurunegala has been named after the Elephant rock. "Kurune" means Tusker or an Elephant with protruding teeth and Gala in Sinhala means rock. Kurunai means Tusker or an Elephant and Gal in Tamil means rock or hill. Kurunegala's old name was Hasthishaila-pura, which can be translated as The city of the Elephant rock in Sanskrit. In some ancient literature the word Athugal-pura is also employed to describe the city of Kurunegala.

Ven. Amaramoli Thero and other members of the temple and villagers , who are now part of of the statue carving committee, were deeply grieved over this barbaric destruction of the Bahaminian Buddha statues by the Thaliban extremists, and made a firm determination to carve a large rock statue. A wonderful effort by a group of villagers and a Buddhist monk which most of the community thought was an impossible task has come to a world famous creation today.

Ven. Amaramoli Thero is shouldering the gigantic task of carving the Samadhi Buddha Statue 67.5 feet high, utilising a massive rock situated in the temple Premises, once the carving is completed it will go down in the history as the largest rock carve Buddha Statue in Sri Lanka.

The tradition of the loom takes its roots at the very inception of Sri Lankan history. Today the industry faces decline due to various reasons ranging from the lack of skilled expertise, uncompetitive market prices, outdated designs and lack of infrastructure and technology. Selyn takes on this challenge to revive our heritage and extend its benefits to our rural women and men.

Founded in 1991 by Sandra Wanduragala, Selyn started its work with 15 women in the village of Wanduragala in Kurunegala, Sri Lanka. Joined shortly thereafter by her brother, Hilary Wanduragala, Selyn is a fair-trade certified handloom company that engages the traditional sri lankan community of handloom weavers in bringing to you products handmade with 100% cotton and infinite measures of skill and devotion.

Selyn is Sri Lanka's only fair-trade guaranteed company and supplies to fair-trade and commercial customers all over the world.

The name of the location suggests exactly what it is. Kurulu means birds and Kele means forest. Kurulu Kele, which is located in the lowland wet zone, was declared as a sanctuary in 1941 due to its high birdand plant diversity. A rich bird sanctuary both typical and migrants, located in close proximity to the Kegalle town.

Widely popular not only in the region but island wide, it is a rich bird sanctuary of both typical and migrants. Two types of habitats identified at the Kurulu Kele Sanctuary (KKS), include the dense forest area and the rocky area. Located in the heart of the city Kegalle, accession is easy.

Ridivihara is located at Ridigama village in Kurunegala district. The name "Ridigama" means "silver village". Ridi Viharaya has a long history which is dated back in Anuradapura Kingdom time. This temple was done by King Dutugemunu, who ruled Sri Lanka from 161 BC to 137 BC.

According to the historical records, some merchants were traveling from Anuradapura to Hill Country (Malaya rata) and they found a cave with Silver ore in it. They took a piece of silver to the King Dutugemunu and inform him about what they found. King Dutugemunu was facing some difficulties in finding the funds to complete the great "Ruwanmeli Maha Seya" at that time. Revenue from this Silver was used to complete the "Ruwanmeli Maha Seya". In return, king decided to build a temple by that the cave, and named it Ridi Viharaya (silver temple). 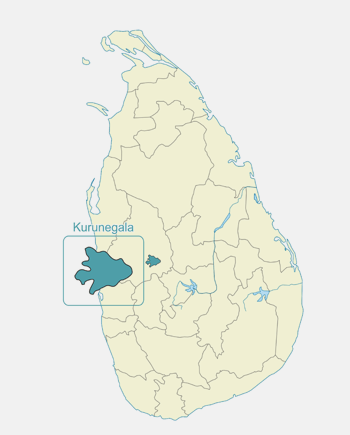