An important transport hub and a major centre of commerce, Matara is one of the key cities in the South of Sri Lanka.

Although Matara is an ancient settlement, no traces of it prior to the colonial era survive to date. While the Portuguese established the town it was the Dutch who saw the advantages of the sheltered estuary of the Nilwala Ganga, built it up to an important axis for cinnamon and elephant trading. Today, Matara divides into two areas: the new town and the Old Dutch colonial district known as the Fort, separated by the river. While the beaches at Matara are indistinctive, the suburbs of Polhena and Medawatte offer excellent snorkelling and surfing. The giant Buddha statue at Weherahena and the Dondra lighthouse – the southernmost point of Sri Lanka are nearby sites worth visiting.

Snake farm is the only farm of this type in Sri Lanka and it has a special dispensation to keep Snakes (not normally allowed in Sri Lanka) as the owner is a third generation ayurvedic practitioner and uses them to produce free herbal medicines to combat snake bites. However, it is not a snake farm, as its name suggests, but a conservation centre. The family has owned the property for 200 years and it was started by the current proprietor’s grandfather. If you are interested in snakes and would like to see, photograph, touch and increase your knowledge in snake, this is the place to visit to experience something you will definitely remember.

Matara is located on the banks of River Nilwala, the third longest river in Sri Lanka. Plan an excursion on a boat with a local boatman who will show you many different species of birds and the famous man eating crocodiles of the Nilwala River. It is delightfully relaxing to cruise along the river, detached from the rest of Sri Lanka, wallowing in one's own -wonder at the magnificence of the riverine scenery.

Weherahena ( Veherahena) is popular temple among the buddhist pilgrims, and is said to be the largest and the first tunnel temple in the world. Weherahena purwaramaya is situated in the village of weherahena in the district of matara in the southern province in Srilanka. Buddhist as well as non Buddhist pay homage to this very popular temple.

The main highlight of this temple is the tunnel shrine. The one-of-a-kind tunnel was created to resemble a story in the Ummagga Jathaka – from the 550 stories of the past lives of Lord Buddha. The 600 foot tunnel is decorated all over with expressive paintings depicting various religious and historical stories. Above the tunnel is the temple’s most striking feature from the outside – the 39 meter high statue of Lord Buddha. The colossal Buddha statue is a wonderful master piece, built after the Anuradhapura and Polonnaruwa peried. Devotees offer flowers, incense and alms to the looming statue and on Poya holidays when the temple can get rather crowded with locals. 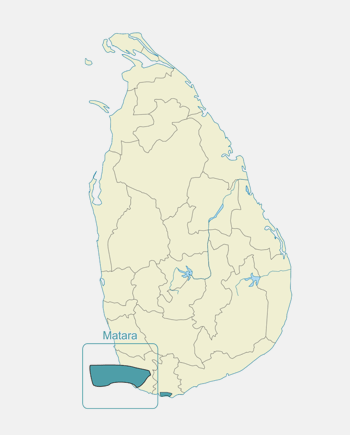