Regarded as the birthplace of Buddhism in Sri Lanka, Mihintale is a historical site of great significance to Sri Lankan Buddhists.

According to legend, King Devanampiyatissa who reigned from 307 BC to 267 BC was out hunting in the nearby forest when he encountered Venerable Mahinda Thera - a Buddhist emissary from India. Upon converting he declared the area a sanctuary for monks, believers and workers with monastic buildings, monuments and facilities; and over the centuries Mihintale has continued to be a venerated site. The past grandeur of Mihintale still remains with the restored stupa standing on a 500 metre tall rocky outcrop. An imposing stone stairway, 68 cave dwellings, refectories, hospitals, resting places, ancient ponds and other ruins still stand to enthral the devotees even today.

The Courtyard is situated at the end of the third flight of steps. To the left of the courtyard is the refectory. Two huge stone troughs can be seen here, which would have been used by lay followers to store food and rice for the monks, close to the refectory.

On either side of the entrance to a building, at a place identified as the monastery’s relic house, are 2 inscriptions engraved on 2 large slabs of granite known as the Mihintale stone inscriptions(Mihintale tablets), erected during the reign of King Mahinda IV (r 975–91). The rules and regulations pertaining to the administrative purposes of the monastery are engraved on these 2 stone slabs.

At the first landing a smaller flight of steps leads to this partly ruined dagoba off to the right, one of the oldest at Mihintale. Kantaka Chetiya is a circular stupa having a base circumference of about 425 feet and 12m high (originally more than 30m). It has three stepped rims. It has four frontispieces in the four cardinal directions, and surrounding these are well-preserved sculptures of dwarfs, geese and other figures. The frontispiece is called Vaahalkada. The four vahaalkadas facing the four cardinal points have different animals on the top of the square pillars - the elephant on the east, the lion on the north, the horse on the west and the bull on the south. Most of the Indian and Sri Lankan archaeologists believe that there is a symbolic relationship between these animals and the four cardinal directions. But, they differ in associating a particular animal with a particular direction.

Is situated on the plain close to the peak of the mountain, and is said to have been built by King Makalantissa. The Dagaba itself is said to enshrine the relics of the great Apostle Mahinda. It is here that King Devanampiyatissa first met Arahant Mahinda. The traditional spot where this meeting took place is marked by the Ambasthala Dagaba.

The name Ambasthale means ‘Mango Tree’ and refers to a riddle that Mahinda used to test the king’s intelligence.

This large stupa known as the Maha Seya is on the summit of the Mihintale hill, built by King Mahadathika Mahanaga (7-19 AD) the base of which is 136 ft (41 m) in diameter. This dagoba (arguably the largest at Mihintale) is thought to have been built to house relics of Mahinda. The bodhi tree to the left of the base of the steps is said to be one of the oldest surviving ones. The stupa which was in a dilapidated condition was completely restored. From here there is a view over the lakes and trees to Anuradhapura, a horizon studded with the domes and spikes of all the massive dagobas.

Outside the site proper are the remains of a monastery enclosed in the ruins of a stone wall. Inside are two dagobas, the larger known as Indikatu Seya (Dagoba of the Needle). Evidence suggests that this monastery was active in fostering Mahayana Buddhism. The main dagoba’s structure differs from others in Mihintale; for example, it’s built on a square platform.

Nearby is a hill that’s been dubbed Rajagirilena (Royal Cave Hill) after the caves found here with Brahmi inscriptions in them. One of the caves bears the name of Devanampiya Tissa. A flight of steps leads up to the caves.

The Avukana statue is a standing statue of the Buddha located at 30km northwest of Dambulla, close to ancient Kala Weva, man-made rainwater reservoir. The statue, which rises to a height off 11.36 meters, is the tallest ancient Buddha statue in Sri Lanka. Aukana Buddha Statue in Asisa Mudra or the “posture of blessing” is carved out of a rock boulder. Carved along the proportion of nine faces: the body height is nine times the length of the face. The proportion of nine faces is the iconometry followed by the sculptors in the eight century AC of Sri Lanka.

It is said that the degree of alignment of the statue is such that raindrop on the nose would drop straight down to small depression carved between the toes. Aukana Buddha Statue is a masterpiece of a colossal Buddha Statue by an unknown sculptor: the serene expression of the statue, the gracefully carved robe with neat pleats brings in delicateness that could hardly be molded into a rock. The impassive expression of the face reflects the supreme spirituality.

Constructed during the reign of Dhatusena, it may have been made as a result of a competition between a master and a pupil. Avukana statue is one of the best examples of a standing statue constructed in ancient Sri Lanka. It is now a popular tourist attraction in the country.

The assembly hall is on the same level as the relic house It’s also known as the convocation hall. It is believed that monks met here to discuss matters of common interest. The most senior monk would have presided over the discussions, and the raised platform in the middle of the hall was apparently where this senior monk sat. Sixty-four stone pillars once supported the roof. Conservation of this site began in 1948. The main path to the Ambasthale Dagoba leads from here.

Amongst its serene, tranquil beautiful forest and boulder clad environs we find some of the earliest examples of Sinhalese hydraulic civilization in Mihintale. Naga pokuna boasts of one of the main sources of natural water at Mihintale. It is situated on an elevated plateau on the side of a hill just below the Mahathupa and Mihindusaya.

Naga pokuna literally translated as Cobra pond takes its name from the five hooded cobra cut in low relief on the rock surface above the pond. The tail of this cobra sculpture is said to reach the bottom of the pond.

The Naga pokuna has been identified by scholars as the Nagasondi of the ancient inscriptions. The great chronicle Mahawamsa referring to this pond says that Elder Mahinda when he re visited the Chetiyapabbata mountain to spend the retreat first entered the place after having a bath at this pond.

The pond appropriately named Sinha pokuna, is situated under shady trees on one of the middle terraces of Mihintale, just below the monks’ refectory on the second landing. Though it is called a pond, it is more a water rail. It is an open air bath which was probably used by the monks who were living in the caves of the neighbourhood. It is called a pond because of the water tank above the figure of the standing lion from whose mouth the water comes out. Half of it is cut out of the natural rock and the other half is constructed of monolithic blocks to form a square pond. The two meter high raging lion has been classed as one of the best animal carvings of ancient Lanka. The rampant lion as it has been described stands as part of an ornamental bathing spout.

Et Vihara (literally, ‘Elephant Monastery’) is another dagoba in Mihintale that is mostly in ruin now, located at an even higher elevation (309m) than the Mahaseya Dagoba. The origin of the name is open to conjecture, but it may have been named after the monastery nearby. The Mihintale tablets mention Et Vihara and its image house.

The stairway has 1840 steps made of granite slab, leading majestically up the hillside to the summit. The first flight is the widest and shallowest. It’s possible to avoid more than half the steps by driving up Old Rd.

When proceeding from Ambastala dagaba along the narrow road, on the slope is the cave known as Mihindu Guhawa or the cave of Arahant Mahinda, where he resided. Out of the caves the most famous and incidentally the most sacred to Buddhists is this cave with its large flattened slab on which Thera Mahinda was accustomed to rest.

At the foot of the mountain are the ruins of a hospital. A bat oruwa (large stone canoe) sits among the ruins. The interior is carved in the shape of a human form, and the patient would climb into this to be immersed in healing oils. A stone inscription and urns belonging to the ancient period have been unearthed. Inscriptions have revealed that the hospital had its specialists – there is reference to a mandova, a bone and muscle specialist, and to a puhunda vedek, a leech doctor. 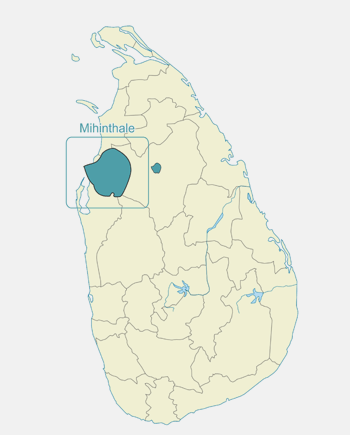