Minneriya National Park is located in the North Central Province of Sri Lanka which is one of the richest areas for culture and archaeology.

The ancient cities of Anuradhapura, Polonnaruwa, Dambulla and Sigiriya are all within half a day’s journey of the park, and the town of Habarana is also not too far off. The Minneriya National Park encompasses the ancient Minneriya Tank which was built in the 3rd century AD by King Mahasen. Today, the ancient reservoir fills during the North Eastern monsoon, but gradually shrinks as the dry season approaches. During this time herds of majestic Asian Elephants, sometimes over 300 in number, converge onto the receding shores of the Minneriya tank to forage on the surrounding greenery. This unique phenomenon is the highest concentration of wild Asian Elephants on Earth and has come to be known as “The Gathering”. This phenomenon peaks during the months of August and September which is the height of the drought and is an opportunity not to be missed by wild life enthusiasts and casual travellers alike. Visitors can also look forward to sighting of other mammals such as Sambar, and Sri Lanka’s two endemic species of monkey, the Purple-faced leaf monkey and Toque Macaque. Although rare, there have been sightings of the Sri Lankan Leopard and Sloth Bear as well as the Gray Slender Loris. The Minneriya National Park is also an ideal location for bird watchers as it attracts many endemic and migrant species. Large flocks of birds are a common sight, especially water birds such as Cormorants, Pelicans, Painted Stork and Lesser Adjutant Stork. There are jeeps to be hired in the surrounding area, or jeep safaris organised by nearby hotels. 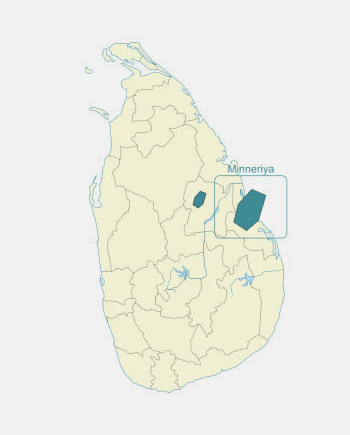