Named the “City of Gems” with good reason, the busy hub of Ratnapura is at the centre of the gem mining industry of Sri Lanka.

Nestled amongst the South western hills, semi-precious stones have been mined in this region since antiquity with many of the prominent gem dealers in Sri Lanka continue to operate from here. A visit to view traditional gem mining and cutting operations makes an interesting excursion. Ratnapura is a major crossroad between the southern plains and the eastern hills, and one of the starting points of an alternative ascent of Adam’s Peak; however, it is significantly tougher than the route up from Hatton. It is also a good base for visits to Sinharaja and Uda Walawe national parks and most guesthouses in town will arrange trips. With the annual rainfall sometimes exceeding four metres, the area is considered one of the wettest places in Sri Lanka.

Sinharaja rainforest is a world heritage site and major eco tourism destination, which can also be described as a Tropical Lowland Rainforest or Tropical Wet Evergreen Forest spanning an area of 18900 acres is located within Sabaragamuwa and Southern provinces of the south-west lowland wet zone of Sri Lanka. It is undoubtedly a rich treasure trove of nature with a great diversity of habitats and a vast repository of Sri Lanka's endemic species found nowhere else in the world.

Named as a world heritage site in 1989, this lowland evergreen rain forest is steeped in deep legend and mystery. The word 'Sinharaja' means, Lion (Sinha) King (Raja), and it is popular belief that the legendary origin of the Sinhala people is from the union between a princess and the lion king who once lived in the forest.

Being at the centre of gem mining in Ratnapura, the visit would not be complete without a trip to the gem museums. There are three in the town. The oldest and best know of these museums is the Gem Bank. Here you will find a fine collection of Sri Lankan specimens as well as some minerals from around the world. Even though this area is best know for corundum, one of the interesting items in the museum is exceptionally large and transparent piece of natural glass. There are two other gem “museums” in Ratnapura. They are the Dhanaja museum in New Town, Ratnapura and the Mini-Pura Museum that is across from the Gem & Jewelery Authority office. Both of these museums have fine collections, but they are also businesses and most of what is on display is for sale. These are good places to find rare mineral specimens.

A reputable place to purchase gems with relatively low sales pressure is Ratnapura Gem Bureau, Museum & Laboratory. There’s a good display of local minerals and gems, as well as information on mining and polishing.

Ratnapura the ‘City of Gems’ is Sri Lanka’s treasure chest, an Aladdin’s Cave of jewels and wealth and the centre of its gemming industry. According to the Arabian Nights, Ratnapura is a lofty mountain and a deep valley with deep rapids, cascades and waterfalls.

A peculiarity of Sri Lanka is that a variety of different stones are often found in the same pit. Cat’s Eye’s with asbestos filaments to give a sharp olive tint, Pale yellow Topaz, sapphires, Raven’s blood rubies, alexandrite, topaz, amethyst, aquamarine, tourmaline, garnet andzircon create a glimmering treasure in Ratnapura.

There are many gem mines around the area, especially in paddy fields on lower ground, which are deep around 10m to 50m. Gems are mined by ancient and traditional methods. Portable hand operating tools use for mining process such as shovel, picks, pans (specially made from bamboo) and cradles. Once soil lifts out from the mine, with the use of water, the dirt and mud wash out using pans and thus if there any gemstone, which heavier than normal stones, remains at the bottom of the pan as mud wash away. 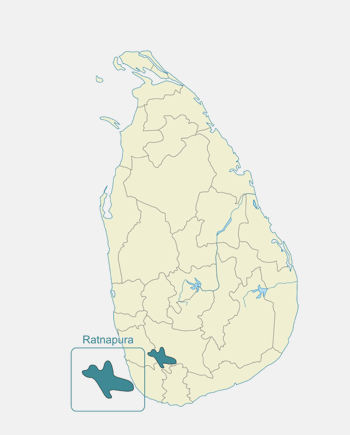