Talawakele is a town in the Nuwara Eliya district and based in the central province.

It is part of the Dimbulla Tea Planting district, the largest tea planting area in the island. The altitude is 3,932 feet above sea level. The railway station of Talawakele is one of the major stops of the ‘Udarata Menike’ main railway line. The average climate is 18C which is the perfect climate for growing tea. There are 2 famous waterfalls in the area which is Devon Falls and St. Clairs falls which begins from ‘Kothmale Oya’ (stream) which runs through the town. The last major hydro-electricity project (Upper Kotmale Damn) in Sri Lanka is currently underway amidst a lot of protest from environmentalists and the residents due to the fear of their homes being submerged due to the damn.

The falls is named after a pioneer English coffee planter called Devon, whose plantation is situated nearby the falls. The Waterfall is 97 metres high and ranked 19th highest in the Island. A view of the front of this 97m-high fall is possible from Midigama.

Devon Falls is located along the Talawakele - Hatton road near the 20th mile post (Talawakele, Nuwara Eliya District). From here it is a walk of 1km through tea estates. The Falls formed by Kothmalr Oya, a tributary of Mahaweli River. Altitude of Devon falls is 1,140m above sea level.

St. Clair's Falls is one of the widest waterfalls in Sri Lanka. St. Clair's Falls is billed as ‘Sri Lanka's Little Nayagara”, or 'king of waterfalls' due to its outstanding beauty. The falls derived its name from a nearby tea estate. It is 80m in height (the 20th highest waterfall in Sri Lanka) and at 50m wide, and consists of two segments, known as 'Big St. Clair' ("Maha Ella")and 'Small St. Clair' ("Kuda Ella"). Created by the Kotmale River, a tributary of the Mahaweli River, it flows down a slope through an abandoned tea estate that covers hundreds of hectares.

The Tea Research Institute (TRI) was founded in 1925 under the Tea Research Ordinance enacted by Parliament in order to facilitate research into all matters pertaining to tea and thereby enriching the industry through a professional approach to commercial tea cultivation and processing. Since its inception, TRI has been the only national body in Sri Lanka for generating and disseminating new technologies related to tea cultivation and processing.

The institute had its early beginnings in Kandy which was later moved to Nuwara Eliya along with a representative nucleus of staff who undertook research work in make-shift laboratories with very modest equipment. In December 1929, the Institute was transferred to the present location, at St. Coombs Estate in Talawakelle. 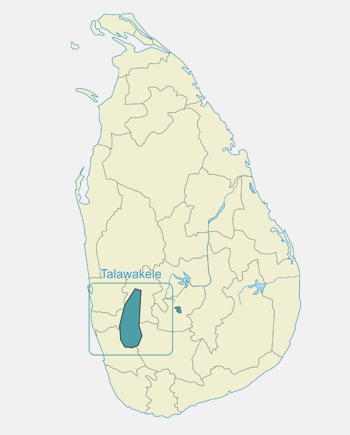