The largest city in the East of Sri Lanka, Trincomalee - better known as `Trinco’ is a vibrant hub of activity, and a natural wonder combined.

Blessed with astoundingly beautiful beaches, it is also the world’s deepest and largest natural harbour. Trincomalee has a significant place in Sri Lanka’s history as one fought over by many a colonial power seeking to take advantage of its strategic position. The Portuguese landed in the 17th century and were ousted by the Dutch later on – who were in turn conquered by the British, and remnants of their occupation remain in the abandoned forts and in the colonial architecture. Trincomalee served as an important naval base for the allies during World War II, and still continues to be vital to the Sri Lankan Navy. The beauty of Trinco and the surrounding areas draw visitors to bask in its unending white sandy beaches, coral islands and shimmering blue seas - distinctly different from coasts around the island. The secluded beaches of Uppuveli, Nilaveli and Kuchchaveli are located north of the town. The magnificent marine life around Pigeon Island – off shore from the bay is worth the short boat ride, and a trip out on a dolphin and whale-watching excursion into the deep seas is certainly a must. The Konewswaram Kovil situated on Swami Rock – a giant outcrop steeped in legend, also gives magnificent views of the Trinco harbour and its surrounding beaches.

The Eagles Golf Link is Sri Lanka’s latest golf course and the only one located in the north eastern part of the island. Located in Sri Lanka’s famous China Bay in Trincomalee, this golf course was established by the Sri Lanka Air Force and encompasses and impressive 171 acres of scenic landscape. Although only 9 hole at present, plans are underway to create a fully fledged 18hole golf course in the near future. The course itself is extremely scenic with a wonderful view of the bay and intermittent lagoons. The club house faces the picturesque bay and offers a serene ambience for post game relaxation. Accommodation is also available by means of 12 fully furnished cabins.

One of only two marine national parks in the country, Pigeon Island National Park is located just off the coast of Nilaveli on Sri Lanka’s picturesque eastern coast. Just a 1km off shore, the island is easily accessible by boat and derives its name from the Rock Pigeons who have made this island their home and breeding ground. Although the wonderful powdery white sand is very inviting, the true magic of Pigeon Island is under the surf. While it is possible to go scuba diving in the area, the surrounding coral reef is so shallow that even armed with the most basic snorkeling equipment one can experience the wonders of this magnificent underwater world which boasts hundreds of species of coral and reef fish. More serious divers may be privy to glimpses of Blacktip reef sharks as well as Hawksbill turtles, Green turtles or even Olive Ridley turtles which also frequent the shallow waters surrounding the island.

The legendary Kanniya Hot Water Springs have now been converted into hot water wells. Each well is approximately 3 to 4 feet deep, paved and square in shape. There are seven wells in total, each of which has a slightly different temperature from the other. The water is clear and the bottom of each well is clearly visible. Many of the locals believe that the water from these wells are therapeutic and have special healing capabilities for a variety of ailments. The hot water springs are deeply rooted in Sri Lankan Hindu culture with many visiting the hot wells to conduct religious rituals for lost loved ones.

Originally built by Portuguese invaders using the debris from the historical Hindu Koneswaram temple, Fort Frederick was rebuilt by the Dutch following their capture of the area and duly renamed. As the harbour of Trincomalee was an important port for dominance over Asia, the surrounding seas were the site of many naval battles. The area has been governed by many European invaders including the Portuguese, Dutch, French and British. Today Fort Frederick is home to the Sri Lankan Army’s prestigious Gajaba Regiment, but some parts can still be accessed by tourists. The insignias crown of the British can still be seen on the gateway into the fort.

When you venture further you come to the scenic Swami Rock which is home to the historical and much revered Koneswaram temple. While the current temple was built post independence, the historical and religious significance of the area is immense and is undoubtedly one of Trincomalee’s must visit sites. The Koneswaram temple is one of five historical temples of Sri Lanka and is the temple dedicated to Lord Shiva. It is home to the Swyambhu Lingam which thus makes it one of the island’s most sacred sites for followers of the Hindu religion. You will have to venture bare foot onto this hallowed ground, so it is best to avoid visiting when the sun is at its highest as the rock does get extremely hot, making walking quite uncomfortable. The sheer drop of 130m to the sea has earned Swami Rock the nickname of ‘Lover’s Leap’. The area is totally immersed in history and legend and is definitely worthy of a trip. 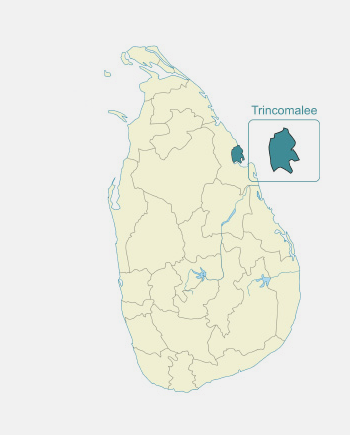