Located to the North of the glorious Knuckles mountain range and the scenic foothills of Matale is the Wasgamuwa National Park which is famous for sightings of Sri Lanka’s magnificent Asian Elephants in their natural habitat.

While it is one of the best places to see elephants all year round, it is also home to a variety of other wildlife including the Spotted Deer, Sambar and Golden Jackal. It is not uncommon to see Mugger Crocodiles lurking in the waters or sunning themselves on the banks of water holes within the park. If in luck, you may even be treated to a rare sighting of a Leopard, Sloth Bear or the Slender Loris. Bird enthusiasts you are in luck too, as Wasgamuwa National Park is home to a variety of endemic birds.

Apart from the many natural wonders Wasgamuwa National Park has to offer, there are some historical ruins which can be visited including the ruins of the Chulangani chaitya which was built by King Mahanaga and boasts a circumference greater than the magnificent Ruwanweliseya in Anuradhapura. Other ancient ruins such as the Malagamuwa, Wilmitiya and Dasthota irrigation tanks as well as the Kalinga Yoda Ela canal which was built by King Parakramabahu I can be seen within the boundaries of the park. 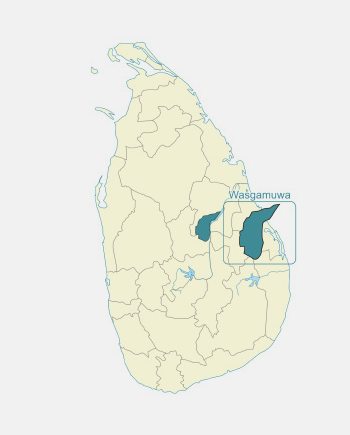