Situated in the arid South East region of Sri Lanka, Yala National Park is home to the greatest variety of the nation’s wildlife and therefore, its most popular wildlife destination.

Declared a Game Reserve in 1938, Yala comprises five blocks covering an area of 151,778 hectares. The park comprises several major habitat types - dunes, scrub forest, riverine forests, rocky out-crops, secondary forests and coastal lagoons with mangrove forests which are home to a wide variety of wildlife. The 44 mammal species found here includes the endangered leopard sub-species Panthera pardus kotiya, which found only in Sri Lanka. Yala is also known to contain the highest Leopard concentration in the world. Other ‘big game’ such as sloth bear, herds of elephants, buffalo, sambar, spotted deer and crocodiles are also found in great numbers. The dry months from May to September are the best times for viewing them. With over 200 species of birds, Yala is a hotspot for birders too. From October to April during the Northern Hemisphere winters, Yala becomes home to many species of migrants and the salt pans at Palatupana are a popular location for bird watching. Yala’s historical significance dates back to 500 B.C and evidence shows that the park was inhabited in the past. There are many archaeological sites within the park and the ancient monastery of Sithulpahuwa standing sedately on an isolated rocky platform is a popular pilgrimage site. 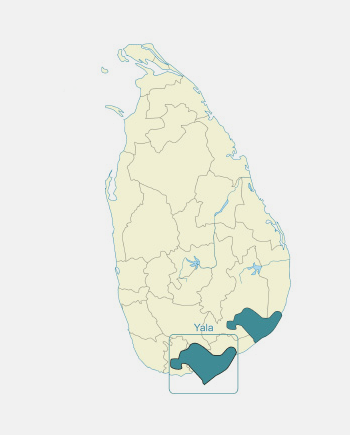