Bundala harbours 197 species of birds, the highest being the Greater Flamingo, Which migrate in large flocks. In 2005 the national park was designated as a biosphere reserve by UNESCO, the fourth biosphere reserve in Sri Lanka. The area was declared a wildlife sanctuary on the 5th December 1969 and was upgraded to a national park 04th January 1993 with a land area of 6,216 hectares. However, the park was re-designed to 3,698 hectares in 1991. Bundala became the first site in Sri Lanka to be designated a Ramsar Wetland. In 2005, Bundala was declared a Man and Biosphere Reserve by UNESCO. In January 2006, an area adjacent to Bundala covering an area of 3,339 hectares was declared as a sanctuary. The Bundala National Park has been identified as an outstanding important Bird Area in the South Indian and Sri Lankan wetlands. 324 species of vertebrates have been recorded in the national park, which includes 32 species of fish, 15 species of amphibians, 48 species of reptiles, 197 species of birds and 32 species of mammals. 52 species of butterflies are among the invertebrates. The wetland habitats in Bundala harbours about 100 species of water birds of which half of them are migrant birds. A few elephants still inhabit the forest of Bundala. Other mammals seen in the park are Toque Macaque, Common Langour, Jackal, Leopard, Fishing Cat, and Rusty-spotted Cat. Mongoose, Wild Boar, Mouse Deer, Indian Munjact, Spotted Deer, Sambar, Black-naped Hare, Indian Pangolin and Porcupine. 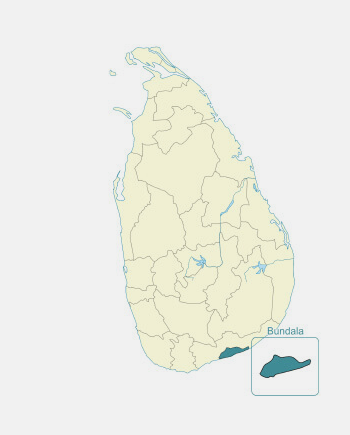