Explore the Northern region of Sri Lanka and its unique culture by travelling through the diverse city of Jaffna.

This northern city has evolved and transitioned into a sprawling hub that is home to many attractions, from the Jaffna Clock tower, Duraiappa Stadium and the Jaffna Market, to the fishing hubs and museums – this tour offers a rich cultural experience for everyone! Behold the ancient Nagadeepa Vihara, where legend has it that the Gautama Buddha visited the site after five years of attaining Enlightenment to settle the dispute between two warring Naga kings. Enjoy the fine beaches of the eastern coast in Trincomalee and experience the wonder of the Sigiriya Rock Fortress – a unique adventure awaits you!

On Arrival at Colombo International airport, our representative/chauffeur guide/national guide will welcome you. Upon completion of arrival formalities, you may leave for your chosen hotel at Negombo.

After breakfast you may leave for your chosen hotel at Anuradhapura. This evening we visit ancient archeological sites in Anuradhapura (AUS $ 36 per person) which belongs to 1st Century BC till 3rd Century AD.

The ancient capital of Anuradhapura reigned supreme for over a millennium as one of the greatest monastic cities of the ancient world famed for Buddhist culture and architectural achievements across Asia and Europe. Ruled by 113 successive kings and 4 queens, Anuradhapura was a majestic sprawl of magnificent palaces, ornate pleasure gardens, exquisite sculptures, and vast Buddhist temples. The three main ‘dagabas’ are amongst the biggest architectural creations of the ancient world smaller in size only to the Pyramids of Giza.

Proceed to Jaffna and check into the hotel.

Jaffna town-After the independence from Britain in 1948, Jaffna town was ranked as the second largest town next to Colombo. Due to the three decades old civil war, the town was torn apart and now in the process of emerging as phoenix. Jaffna is the cultural capital of Tamils in Sri Lanka and the unique features are needed to be witnessed.

Dutch fort-Even though It’s called as the Dutch fort, it has more than, 2,000 years old history as archeologists recently have unearthed 2,000 years old Chinese clay pots and 1,500 years old Romanian coins in order to prove the ancient history. Despite the fact that this 22 acres fort badly affected by the bombing, for certain extent it has been renovated.

Famous Library-It’s a pity this world famous library was burnt by the hooligans in the early eighties with more than 97,000 books and manuscripts but tries to provide the esteemed services once again to the needy in the region after it had been reconstructed.

Fishing hubs-Jaffna’s sea food is very delicious as 99% of the catch is pure natural. Mesmerizing crabs, scrumptious prawns, and luscious cuttlefish, delectable lobsters etc are exported to many western countries due to the renowned trade mark. The splendid Christian tradition and local cultural touch can be witnessed in the construction of the Catholic and other branches of churches which can be seen in the close vicinity.

Old Park-Once used by the British in the past for several administrative purpose and recreation needs now serving as one of the relaxing area for the Jaffna populace.
Museum-A small museum in the heart of Jaffna encloses sufficient relics, used utensils, manuscripts, unearthed archeological pieces etc to illustrate the rich culture of Jaffna in spite of limited modern resources.

Nagadeepa Purana Vihara is an ancient Buddhist temple situated in Jaffna District of Northern Province, Sri Lanka. It is among the country's sixteen or sixteen holiest Buddhist shrines (Solosmasthana). According to contemporary history, the Gautama Buddha visited the site after five years of attaining Enlightenment to settle the dispute between two warring Naga kings, Chulodara and Mahodara.
Ancient history according to the Mahavamsa chronicles and the Tamil Buddhist epic Manimekalai, mentions a gem-studded throne and a stone with the Buddha’s footprint at the island Nainativu, (also known as Nagadeepa) which pilgrims from India visited.

Proceed to Karainagar. Enjoy the best beach in Jaffna Peninsula, Casuarina Beach. On your way back short stopover to explore Nallur Hindu Kovil.

Casuarina Beach is in Karainagar, Jaffna District, Sri Lanka, about 20 kilometers from Jaffna. Casuarina Beach in Karainagar is also called and written as Casoorina, Cashoorina and a few other similar names. This is considered to be the best beach in Jaffna Peninsula with white sand.The beach got its name due the casuarina trees along the beach. The beach lies about 20 km off Jaffna and may take about 45 minutes to travel by a vehicle.

Nallur temple-It’s almost impossible to explain the art and culture of Jaffna without mentioning sculpture and beauty of Nallur temple that has more than 500 years history. The most spectacular cultural and religious place in Jaffna is Nallur temple and this is a must visit destination for a traveler in north and still attracts thousands of locals daily. 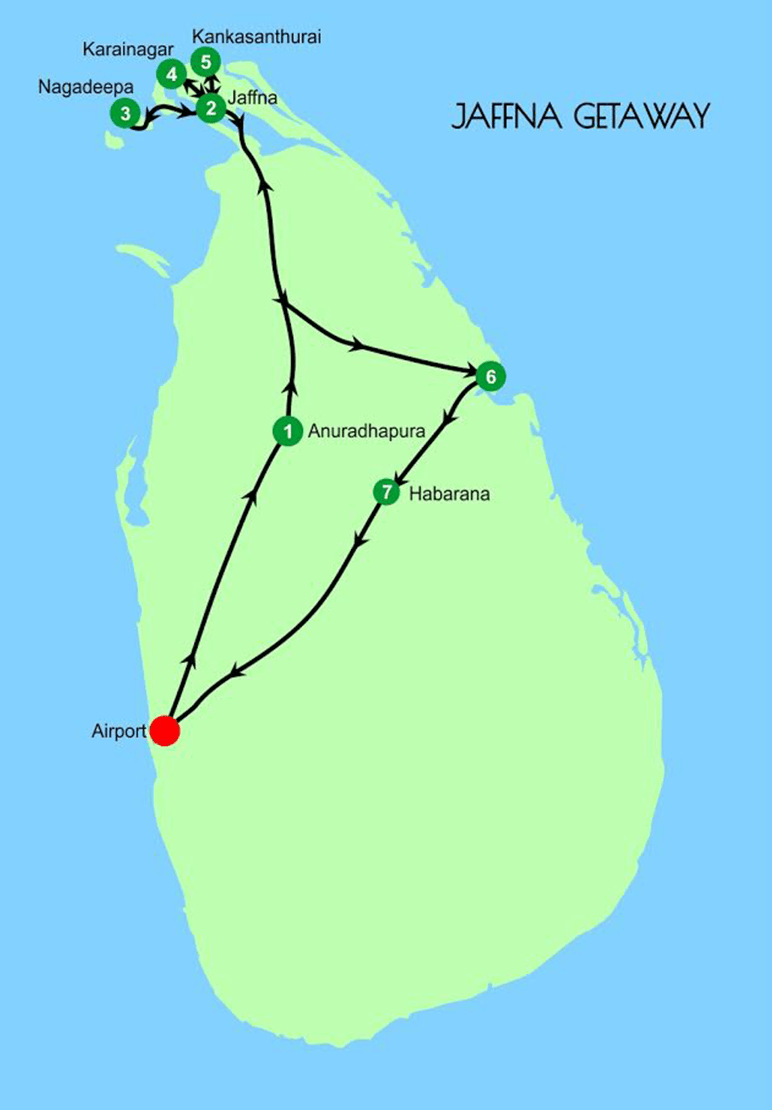 We look forward to helping you with your enquiry

You are enquiring about the Jaffna Tour.
If you have a general enquiry not relating to this tour, please use this contact form

Want to know more about Tours?

Thank you for your enquiry!
We will contact you as soon as possible.

Something went wrong.
Please try to send the form again!