The ultimate icon of Sri Lanka’s historic past, the giant rock fortress of Sigiriya arises high above the flat landscape, surrounded by jungle on all sides.

A testimony to the inventiveness of the ancient civilisations of the land, the once impenetrable stronghold of King Kassapa, ‘Sihagiri’ or Lion’s Rock as it was called then, is considered to be the 8th wonder of the world today. The feats of artistry, architecture and engineering at Sigiriya continue to impress visitors with their utter magnificence, even thousands of years on. Intricately landscaped pleasure gardens sprawl out below the rock, giant lion paws hewn in stone mark the entrance to the fortress at its foot, a highly polished mirror wall still carries the scrawled writings of ancient poets. A somewhat treacherous climb up the rock is well worth it to see the impressive ruins of a once glorious city at the summit – 370m high. And the 360 degree view from the top is equally astounding. Even more amazing are the exquisite frescoes painted on to the sheer rock face – their beauty still unmarred despite the trials of time and attempts at destruction. The village and its surrounding areas also offer plenty of interest both historical and natural for those willing to explore.

A visit to the Sigiriya Museum is the perfect way to gain insight in to the important role the Sigiriya rock has played over the years. It is also a perfect way for those who are physically unable to venture right to the summit of the rock fortress to gain an overview of the many sights and sounds that they otherwise may not be privy to. Situated a short distance away from the entrance to the ancient walled city, the Sigiriya Museum has been designed as a green building using the rock fortress as inspiration. An abundance of water and greenery play a pivotal part in order to create the ambience of Sigiriya itself. The floor is created in a way that simulates the journey to the rock fortress through a series of ascending terraces and wide stairways. The entrance to the Museum has been designed in a similar fashion to the archway that precedes the rock fortress.

The museum enables visitors to gain a thorough understanding of the historical significance of the Sigiriya rock to the area through a myriad of exhibits. On display are artifacts recovered through archeological excavations which include human skeletal remains, tools, jewels, sculptures and many other such items. There is ample information provided, often accompanied with photographs or drawings, so visitors can engage in a self guided tour and get a real understanding of the historical and cultural wonders of the area at their leisure. The museum does not simply focus on the period in which King Kasyapa created the now world famous Sigiriya Rock Fortress, but delves further into history and uncovers the wonders of prehistoric Sigiriya and how humans occupied Sigiriya and the surrounding land almost 10,000 years ago. Sigiriya is also thought to have been a Buddhist monastery at one period of time. Sigiriya’s connections with many foreign lands including the Gulf, China, India and the Roman Empire are explained through a series of trade routes.

While the Sigiriya Rock Fortress is by far the most famous historical site in Sigiriya, just 2km down the road is the Pidurangala archaeological site. Pidurangala is another rock with historical significance which is thought to have been occupied by monks who lived in the surrounding caves in a history spanning over two thousand five hundred years. However, the area came into prominence after King Kasyapa moved his kingdom to Sigiriya and Pidurangala is said to have become a prestigious Buddhist monastery during this time. An alternate theory suggests that the Sigiriya rock was the site of the original Buddhist monastery and that it was moved following King Kasyapa’s arrival. King Kasyapa is thought to have played a significant role in developing the monastery and built the "Uppalavanna Kashyapa Giri Viharaya" at this site. Pidurangala is not a commonly visited tourist site as it is not as grand as its close neighbour, the Sigiriya Rock Fortress. Furthermore, the rock is not as easy to climb as Sigiriya. However, if you are in good shape and are on the lookout for some history combined with adventure, Pidurangala is the ideal site for you. The terrain can be pretty rough, especially once you pass the relic of the Reclining Buddha, so make sure you have proper footwear and take plenty of drinking water. Once you reach the summit however, the view that greets you is truly magnificent. An ancient stupa which has since turned into rubble can be seen at the highest point of Pidurangala.

The Sigiriya Rock Fortress is possibly Sri Lanka’s most famous historical site and attracts thousands of locals and tourists every year. The history as recorded in the ancient chronicles states that the Sigiriya Rock Fortress was built by King Kasyapa. Kasyapa was King Dhathusena’s son by a non-royal consort and thus was not an heir to the throne. Unable to accept this, Kasyapa killed his father usurping the throne which rightfully belonged to his brother Mogollan. Knowing that Mogollan, who fled to India, was bound to return and challenge him for the throne, Kasyapa moved the kingdom out of Anuradhapura and built his palace on the summit of the Sigiriya rock.

Approaching the Sigiriya rock one can’t help but wonder how ancient builders accomplished the seemingly impossible task of building such an elaborate royal palace at the summit of this 200m high granite rock. This astonishing feature of engineering and construction had a highly sophisticated irrigation system which even went up to the palace complex atop the summit. In fact the irrigation system was so good that fountains which are found in a series of symmetrical pools still spurt water almost 1500 years after they were constructed. The entrance to the summit of the palace is guarded by a pair of giant lion’s paws which have been sculptured out of rock. The original entrance is said to have had visitors enter through the open mouth of a lion, but this has since perished. As if all this is not enough of a reason to visit the Sigiriya Rock Fortress, the famous Sigiriya frescoes which you encounter half way up the rock are truly breathtaking. The approach to the rock is well fortified with a complex rampart system complete with city walls and a moat. The view from atop the summit is breathtaking and enables you to take in the beautiful landscape for miles.

Considered by most as Asia’s best preserved ancient city, Sigiriya is considered to be one of the oldest tourist attractions in the world. There is ample evidence of ancient visitors recording their impressions through a series of comments and verses scratched on the famous mirror wall of the rock in some of the earliest known graffiti. As Sigiriya is located in the harsh dry zone, it is best to climb the rock as early as possible as it does get very hot very fast!

This region of Sri Lanka is defiantly considered prime elephant country and you are bound to encounter elephants along the wayside as you travel around the area. Sigiriya is no exception. Thus, if it is an elephant ride that you seek, then you are certainly in the right location for it. Exploring the majestic surroundings of Sigiriya on the back of the world’s largest land mammal will only enhance your Sri Lankan holiday even further. After all, this is exactly how King Kasyapa was said to have travelled and even went into battle... perched high atop a majestic elephant. Experience historical Sri Lanka in all its totality with an elephant ride in Sigiriya. This will truly be the icing on the cake of what will most certainly be one of the most memorable destinations you are ever likely to visit. 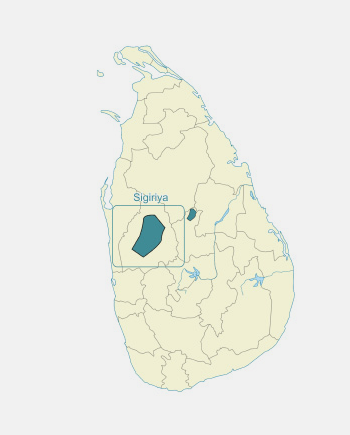