The second largest town on the East coast, Batticaloa or ‘Batti’ as it is fondly known was long isolated during the war years, but is now very much back in business as a novel place of interest for the traveller.

Set on a narrow sliver of land backed by the lagoon the town is surrounded by water on three sides, with the constantly shifting views of land, lagoon and ocean. The lagoon is famed for the mysterious ‘singing fish’ – ethereal sounds heard clearly on moonlit nights from April to September – the subject of much folklore and speculation. Batticaloa also has an interesting colonial past – first conquered by the Portuguese, the Dutch made their initial landing in Sri Lanka in 1602 establishing a strong foothold on the island by gaining control of the resident colonists in 1638. Their legacy remains in the old town architecture with colonial style houses and grand churches; the Dutch fort too, still stands guard over the lagoon.

Batticaloa, known as the land of the singing fish is the main city of the Eastern Province. It is here that the magnificent Dutch Fort, which was initially built by the Portuguese in 1628 and was later captured by the Dutch in 1638 and served as a trading centre for spices can be seen. Later this fort was also used by the British from 1745 onwards and as a result has been used by all three main colonies which adds to its uniqueness and historic value.

The Dutch Fort can be found in Puliyanthivu’s island which is in the heart of Batticaloa town. It is built out of granite and coral and is a square structure with 4 bastions surrounding the fort. It is also surrounded by the Batticaloa lagoon on two sides where mangrove swamps, coral reefs and sea grass beds can be seen growing, thus making it quite a picturesque view for anyone who visits it. In addition to this, ancient cannons still surround the fort adding to the historic aspect of this scenic fort. Today it houses the office of the District Secretary.

A perfect view of the Indian Ocean can be seen from the fort making it a worthwhile visit for local and foreign travelers alike. Although it may have undergone some damage during the 30 year war in Sri Lanka it is still in good condition and it is one of the many reasons as to why this fort is a main tourist attraction to anyone visiting Batticaloa.

A long stretch of beach covered in golden sand unites Kallady and Navalady. Navaladay is a picture of an ideal town in Batticaloa with beautiful churches, shops, schools and even has 4 small airports. Navaladay also has beautiful beaches making it an ideal location to relax and unwind whilst taking in the scenic beauty. Kallady is the ideal place for swimming and soaking up some golden rays of sunshine. The most interesting thing to see or rather hear is the singing fish which are unique to Kallady. They can be easily spotted from April to September on full moon nights and it is supposed to be the best time to experience them. On a more sombre note, visitors can also see wreckage of the 2004 Boxing Day tsunami which hit the island’s coastal belt with fervour and destroyed many lives and properties and is a reminder of those who perished on that fateful day.

Another attractive site is the Kallady Bridge also known as the Lady Manning Bridge. It was built by the British in 1924 during their colonisation of Sri Lanka. William Manning was the governor at that time and the bridge is named in honour of his wife. The original bridge was the longest bridge in the island at one point but now it is unused and considered to be more of a historical site for people to visit. Last year a newly built version of the bridge was opened and it crosses over the Batticaloa lagoon and is now a part of the A4 route which makes up the Colombo – Batticaloa highway. This new bridge encourages people to walk on it and experience the unique view of the Batticaloa lagoon whilst catching a glimpse of Sri Lankan history.

Rather than just visiting the beautiful Sinna Uppodai lagoon and taking a picture why not make the event even more memorable by taking a bike ride along it. Not only do you get an extended view of the lagoon but you also get to bike to certain sites on the way. Starting from Palameenmadu you can bike to Kallady Bridge down Munich Victoria Friendship Road. On the way you pass the Village Empowerment Academy and the Picasso Art Gallery and also see fisherman, birds and other wildlife creatures.

One can also stop at the Batti Lagoon Park and go for a boat ride to other minor islands such as Bone Island or continue on to see the beautiful lighthouse. Although it is a bit small and can be quite stuffy, especially in the heat, it is worth a visit as it is a magnificent sight. Finally you can pay a visit to the Environmental Resource Centre and Eco Park. There are many souvenirs available to be purchased along the way too. A bike ride is the perfect way to experience more of Batticaloa in a unique way and build memories that will last a lifetime.

The Handloom and Handicraft Sales Centre in Batticaloa is the perfect place to buy a souvenir to take home with you to keep you holiday memories alive. Handloom has been in our country from the beginning of time and has been mentioned in various history books. Today although the industry has become considerably smaller, it is still prominent as textiles are one of the main items we export. A variety of silk batik saris, sarongs, table cloths, shawls and many more such handloom and handicraft items are all available at this center. Most of them even have traditional folklore designs on them.

Weaving is a skill that very few have acquired and is most popular in rural areas. Although it is labour intensive as it requires weavers to have very strong legs and arms as they still use the large wheel like structures, it is skill that most weavers are proud of. Handloom truly captures the glory of Sri Lanka and there is no better place to purchase handloom from than this center in Batticaloa. It is open from 8.30am -4.30 pm on Monday to Friday and from 8.30am to 12pm on Saturday.

Batticaloa is considered to be one of the best diving sites in Asia and offers an unforgettable experience for both local and foreign travelers. As an island Sri Lanka sits on top of a sandbank which is 3000m in depth allowing people to see rock bottoms and shallow sand in addition to sharks and various types of endemic fish.

Due to the strategic and geographical position of the island, back in the day Sri Lanka was amidst many international trade routes, especially those between Asia and Europe. As a result many ships would arrive at these shores often guided by the wind or in later years to re-fuel and to exchange goods. Some ships were not always successful in reaching their destinations and resulted in being wrecked near our coast. The most well known wreckage is the British Aircraft Carrier HMS Hermes which sank near Batticaloa during the Second World War. It is by far one of the most spectacular wrecks because this carrier was the first purpose built aircraft in the world; unfortunately it was sunk by a Japanese Carrier Fleet in 1942. At a depth of 53m this dive is recommended for the more experienced divers but is undoubtedly an experience not to be missed.

Some wrecks have partially disintegrated due to their age and the composition of the water. However they are still worth seeing and attract many divers and tourists throughout the year. Some other wrecks worth seeing include the Lady McCullum, Gladys Moller and Boiler Wrecks which are believed to be the SS Brennus and Sir John Jackson. In addition to ehis the Eel Garden, Mushroom Reef and Vandalous point are a few more other interesting dive sites to name which will allow visitors to witness the wonders of macro life under azure waters. These wrecks combined with the natural beauty beneath the tropical waters of the Indian Ocean makes diving a must do activity when visiting Batticaloa. There are many renowned diving centers that offer an unforgettable experience and a range of dive sites which cater to varying degrees of experience.

Prawn fishing is an age old tradition that requires great skill. These skills are often passed down from generation to generation within the fishing community and are of great value. With Batticaloa prawns being the most sought after prawns in Sri Lanka, over 11750 families engage in lagoon fishing in Batticaloa. In just a month over 12 metric tons of prawns are caught and the government has even taken steps to build prawn farms to help out the families.

Sri Lanka being an island it is only natural that its inhabitants develop a love for seafood, prawns being among them. Nothing tastes better than a delicious spicy prawn curry infused with Sri Lankan spices eaten with bread or steamed rice. It is a dish that must be tasted when visiting Batticaloa. Most restaurants overlook the sea and one is able to enjoy delicious prawn dishes whilst basking in the view of fisherman going out to sea in their boats. These commitment souls set out daily looking forward to the catch of the day hoping to return with loaded nets and smiling faces. Prawn fishing is an event that allows travelers to get a glimpse of true rural life. This tradition attracts both local and foreign travelers alike and there are opportunities for travelers to try their luck at prawn fishing and experience the rural life first hand.

The Batti Lagoon Park is the first park of this nature on the Eastern coast of Sri Lanka and can be found on the way to Palameenmadu. There are a variety of water rides to choose from including paddle boats, kayaks and even swan boats. Motor boat rides are also available for those who want to tour the lagoon and visit the nearby islands such as Bone Island, Kallady Bridge and the Dutch Fort to name a few nearby attractions. The park is open daily from 7am to 8pm and is an ideal place to spend some quality family time engaging in fun activity. There is a play area for kids and they also hope to expand and build a swimming pool and a boat restaurant where visitors can enjoy a delicious meal.

Tanks or reservoirs are closely linked with Sri Lankan history. Tanks were built during the time when kings ruled our land using some of the finest engineering methods the world has ever seen. These ancient engineering methods were so effective that some of these tanks are still fully functional even today. They were mainly built to conserve rain water which was then used for agricultural purposes and the Unnichchai tank is no different.

The Unnichchai tank is situated in the Eastern province just 25km from Batti Island and is 31.77km in length and 62m above sea level. It is quite a massive tank and provides a picturesque view especially at sunrise and sunset. One is able to see a variety of birds flying overhead and even the occasional visits from oxen or a herd of wild elephants. This tank provides water to many families situated around the area and is one of the most prominent tanks in that area. 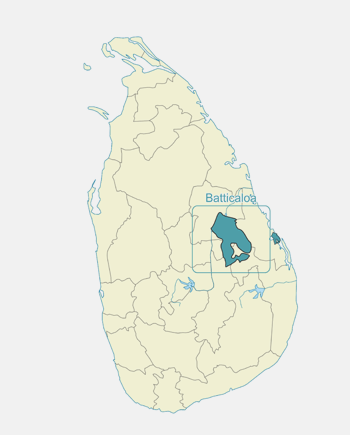