The primary resort town on the western coast of Sri Lanka, Negombo is highly sought after for its long beaches, buzzing cosmopolitan lifestyle and its close proximity to the airport at Katunayake.

The economy of the town and the region is mainly based on tourism and its centuries-old fishing industry which continues to thrive today – making it a paradise for seafood lovers. Here, myriad cultures mix and exist freely. The town, which is predominantly Roman Catholic, is called “Little Rome” due to the highly ornate Portuguese-era Roman Catholic churches found within it. However, Buddhists, Hindus and Muslims too have significant landmarks of their own – often next to each other. Several buildings also date back to the Dutch and Portuguese colonial era, including an ancient Dutch Fort gate built in 1672 now a part of the prison and the Dutch Canal which was a supply route to the administration. The 100km long canal – still very much in use, runs through and a boat ride will offer a different perspective of the city. The wide beaches and the gentle surf are ideal for water sports and a few well preserved coral reefs and a 50 year old shipwreck attracts divers too.

Negombo is a popular fishing town in Sri Lanka, located on the west coast of the island near the Negombo Lagoon. The Negombo Fish Market is the second largest fish market in the Island and is a noisy, colourful and even smelly affair! It is situated near the Old Dutch Fort Gate and is definitely worth a visit to experience local culture and enjoy seeing the many variety of fish and seafood being offloaded from the boats. Fish that are captured from other neighboring towns such as as Wennappuwa, Marawila, Chilaw, and Kalpitiya are also transported to the Negombo Fish Market. . Varieties of fish on sale would be shark, tuna, sardine and mackerel .Live crabs, shrimp, lobster and prawns are plentiful too for sale at the stalls in the market. The fish is laid in heaps for display and is quite an interesting sight to see. They can be purchased in bulk or in smaller quantities. The price is very economical in comparison to what you would pay at a supermarket or commercialised fish store. So if fresh fish is what you need for a scrumptious lunch or dinner, or just to experience the native fishing industry, a visit to the Negombo fish market is highly recommended.

Built by the Dutch this canal runs from Colombo to Puttalam and is 100km long. This magnificent canal offers tourists another perspective from which the city can be viewed and today there are many boat rides that offer tours of the ancient Dutch canals. Along the way visitors can see old churches and fishing villages together with breathtaking views. In ancient days this used to be an important link in the transportation route which supplied the Dutch colonial system. It is both a historic and scenic canal. The 100km (60 miles) canal is still very much in use and is an interesting attraction for visitors who wish to witness Negombo town from a different perspective.

St. Mary’s Church in Negombo is approximately 140 years old and is one of Negombo’s best known Roman Catholic Churches. It is a popular place of worship, especially amongst the many Roman Catholics who reside in and around Negombo. The church is such a popular place of worship that it is possible to find worshippers engaged in a quiet word of prayer even during the afternoon when the church is closed. The church has many religious paintings on the ceiling and lovely stain glass windows which are best viewed in the early evening to gain the best effect. Displayed at the altar is a detailed sculpture which is worth seeing. Visitors should ensure that they dress and act in a respectful manner as this is an active place of worship which is sacred to many.

Negombo is a charming fishing town on the western coast of Sri Lanka and is located in close proximity to the Bandaranaike International Airport. The towns golden sandy beaches are popular as a year- round holiday destination. There are daily fish auctions to observe and enjoy and visitors can even go on a fishing trip on one of the wooden oruwas ( traditional fishing vessel). For the water sports enthusiast, this is the place to be. Water sports equipment can be hired quite easily and one can even enroll for a diving course. Divers will be thrilled to see beautiful varieties of corals and fish. Other attractions in the area are remnants of the Dutch Fort built in 1642, old Dutch houses and Portuguese churches, the Dutch canal, bird watching and boat rides at the Muthurajawela marsh lands, Kudapaduwa which is a 40-year-old shipwreck and Angurukaamulla Temple. There is an abundance of accommodation in this beach town to suit any budget and requirement. The numerous road side cafes and restaurants serve a variety of local and foreign cuisine which will ensure an enjoyable stay in this relaxed and laid back resort town.

There is another side to Negombo aside from the fabulous beaches. Negombo is rich in history and the ruins of the Old Dutch Fort bear testament to this fact. Located to the seafront near the lagoon, the gateway to these ruins still stands with the inscription “1678”. The green area which is known as the Esplanade, is popular among the locals with many participating eagerly contested games of cricket; a sport which all Sri Lankans are extremely passionate about. The former grounds of the Old Dutch Fort are now occupied by the town’s prison, thus access is denied unless of course you commit a crime! There are however several other old buildings from Dutch Colonial times which are still in use and make for an interesting visit. One such building is the Lagoon Rest house.

Muthurajawela, which name when translated, means “Swamp of Royal Treasure’ is a marshy land located about 30 km north of Colombo city and covers an area of approximately 6,000 hectares, inclusive of the Negombo lagoon. The abundance of flora and fauna (approximately 200 varieties each) and wonderful habitat has made this a haven for birds. Muthurajawela has been declared a sanctuary and is home to over 100 species of local and migrant birds. Many species of birds, butterflies and fish that live here are endemic to Sri Lanka. Some of the spectacular varieties of birds one will have the pleasure of observing are Purple Heron, Black Bittern, Asian Open-bill, Little Grebe, White-breasted Water hen, Pied Kingfishers and birds of prey at the wetland include the Shikra, Brahaminy Kite and White-bellied Sea-eagle. This marshland not only attracts bird watching enthusiasts but also ecologists and photographers. A boat ride can be experienced through the marsh and lagoon. Visitors can travel on water or take a relaxed stroll through this natural wonder. 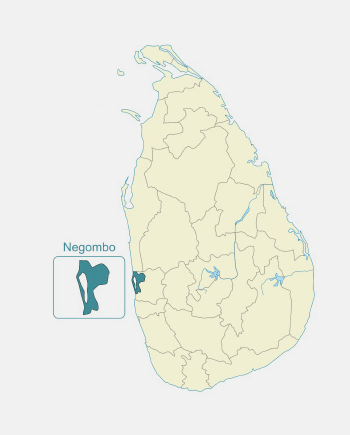