Mirissa is a small village perched on a beautiful crescent of beach on the South of Sri Lanka made famous as a world renowned site for whale watching.

Regarded as the closest point to where the giant Blue whales congregate due to favourable sea conditions. The ocean around Mirissa is popular with the giants of the sea – no less than five types of whales (blue whale, Bryde’s whale, sperm whale, killer whale and pilot whale) and four kinds of dolphins (spinner dolphin, bottle nosed dolphin, striped dolphin, Risso’s dolphin)can be spotted. There are many that offer ocean trips to see these giants but it is advisable to pick certified tour operators and guides. Off shore, the pace of life is quiet with a scattering of guest houses and simple cafes on the beach. Mirissa also offers water sports facilities such as sailing, fishing, coastal cruises, river trips, sea kayaking, snorkelling and boating for those looking for some action.

In the recent past Sri Lanka has become renowned for being one of the best places in the world to see the largest creature on the planet – the majestic Blue whale. Mirissa is as good a place as any to set off to see these gentle giants serenely go about their business in the azure waters of the Indian Ocean. The season for whale watching in Mirissa is between the months of November and April. If you are lucky you may also catch a glimpse or two of a pod of Sperm Whales or even a few species of dolphins. There is a wide range of privately operated whale watching services, but be careful of the smaller vessels that sometimes venture too close to these magnificent beasts, as the whales tend to get stressed when boats are too close to them. This could end up driving away the whales all together. The Sri Lanka Navy also operates a whale watching service which departs from the Navy base at Galle and ventures out to the seas off Mirissa.

The beautiful beachside town of Mirissa has many things to offer travellers. While Mirissa is more renowned for its whale watching rather than fishing, you are more than likely to find boat owners who will be willing to take you on a fishing expedition. The best season for fishing in Mirissa, which is on the Southern coastal belt of the island, is from November to April when the seas are calmer. Reef fishing is available and you may be able to snag yourself a Grouper, Snapper emperor or Bonefish while fishing close to the coast. 8 miles off the coast of Mirissa lies the continental shelf drop where tuna, sailfish and other large game fish can be found. Equipment is available for hire from boat operators. 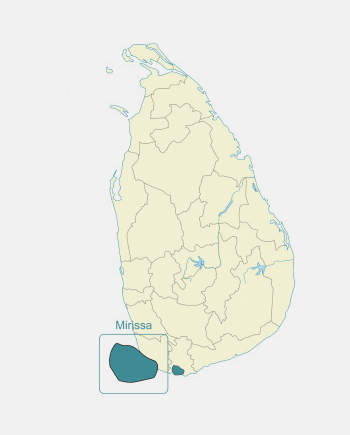