Located in the Eastern Province of Sri Lanka, Ampara is the main town of Ampara District.

It's, about 360 km from the capital city of Colombo. Most of the civilians in the town are Sinhalese and Buddhism is the predominant religion, practiced by most living in Ampara.

This town was known as a hunters' resting place during British colonial days (late 1890s and early 1900). During the development of the Galoya scheme from 1949 by the late Prime Minister D.S. Senanayake, Ampara was transformed into a town. Initially it was the residence for the construction workers of Inginiyagala Dam. Later it became the main administrative town of the Galoya Valley.

Located few kilometers away from the Ampara town, hidden among a thick jungle is the Buddangala monastery, a Buddhist meditation Centre, which is nearly 2300 years old.

Established in the second century BC, the ruins of a once thriving temple and monastery is found scattered over an area of 200 acres within the jungle. The standing ruins spreading across five rocky mountains scattered with ponds tells the story of a vast hermitage in the days gone by when Ampara was a flourishing agricultural and trade base in the East of Sri Lanka, then known as Digamadulla Kingdom. 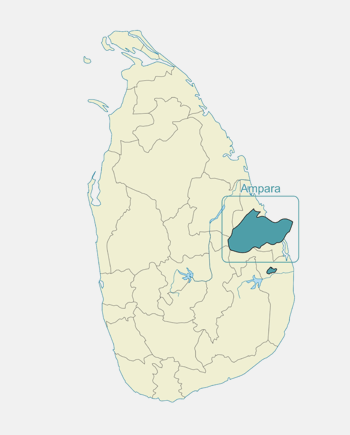