The cultural epicentre and the hill capital of the island, Kandy is Sri Lanka’s second city and home to the Temple of the Tooth - the country’s most important religious shrine, and the traditional pageant the Esala Perahera.

Although modernity and urban sprawl has changed the face of this once quaint hill station, it still carries a regal atmosphere with graceful Kandyan style architecture mingling with colonial buildings set around a tranquil lake surrounded by green hills. The kingdom of Kandy was the last stronghold of the Sinhalese, clinging to its sovereignty long after the island had fallen to the Portuguese and Dutch and the English, preserving its own unique customs and culture until the very last. These traditions live on today in the city’s unique music, dance and architecture. For cultural attractions Kandy is overloaded with historic sites and there is much to explore. For the nature lover the Udawattekelle forest reserve is right at the heart of the city. One can literally walk from the hectic city centre to the quiet stillness of thick jungle in minutes.

Dominating the town is Kandy Lake, which was created in 1807 by Sri Wickrama Rajasinha, the last ruler of the kingdom of Kandy. Several minor local chiefs protested because their people objected to labouring on the project. In order to stop the protests they were ruthlessly put to death on stakes in the lake bed. The central island was used as Sri Wickrama Rajasinha’s personal harem. Later the British used it as an ammunition store and added the fortress-style parapet around the perimeter. On the south shore, in front of the Malwatte Maha Vihara, the circular enclosure is the monks’ bathhouse.

Temple of the Sacred Tooth Relic

Just north of the lake, the golden-roofed Temple of the Sacred Tooth houses Sri Lanka’s most important Buddhist relic – a tooth of the Buddha. During puja (offerings or prayers), the heavily guarded room housing the tooth is open to devotees and tourists. However, you don’t actually see the tooth. It’s kept in a gold casket shaped like a dagoba (stupa), which contains a series of six dagoba caskets of diminishing size. The entire temple complex covers a large area and as well as the main shrine there are numerous other temples and museums within the complex. The following are some of the key sites.

Located 20km east of Kandy and surrounded on three sides by the Victoria Reservoir, with the Knuckles Range as a backdrop; it’s worth coming here for lunch at the clubhouse and to savour the views. Claimed to be the best golf course in the subcontinent, it’s a fairly challenging 18 holes.

Has a good selection of local lacquer work, brassware and other craft items in a colonial-era showroom covered in a patina of age? There are some craftspeople working on the spot.

Pinnawela orphanage is placed in Rambukkana, northwest of the city Kegalla, halfway between Colombo and also the ancient royal residence Kandy within the hills of central Sri Lanka. It was established in 1975 by the Sri Lanka wildlife department. This twenty four acres massive elephant orphanage could be an also the breeding place for elephants. The very first elephant baby was born in 1984, and it's the best herd of elephants in captivity within the world. Between 1975 and 2012, sixty seven animals were born here. If you want to feed milk to the little baby elephants then you need to be there by 08:00am. Then you at 10:00 am and 14:00 you will can see them enjoying their morning and afternoon bath which lasts around 2hrs each. This is a must see place on your list of places to visit during your stay in Sri Lanka.

An essential stop on any Sri Lankan tea tour, this museum occupies the 1925-vintage Hantane Tea Factory, 4km south of Kandy on the Hantane road. Abandoned for more than a decade, it was refurbished by the Sri Lanka Tea Board and the Planters’ Association of Sri Lanka. There are exhibits on tea pioneers James Taylor and Thomas Lipton, and lots of vintage tea-processing paraphernalia. Knowledgeable guides are available and there’s a free cuppa afterwards in the top-floor tearoom.

Just behind the main temple, but still inside the complex, is the World Buddhism Museum. Housed inside the former High Court buildings, the museum contains lots of photographs, models and displays illustrating Buddhism around the world. Note that a large number of the statues and other exhibits are actually reproductions. Freelance guides will offer their services around the entire temple complex for around Rs 500, and free audio guides are available at the ticket office. An elevator facilitates access for travellers with disabilities. The shrine receives many worshippers and tourists, with fewer tourists in the morning. Wear clothes that cover your legs and your shoulders, and remove your shoes. 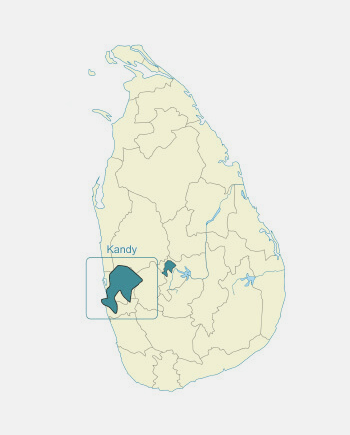