Located on one of South’s most beautiful stretches of coastline, the small town of Tangalle remains fairly undeveloped in comparison to the more popular resorts further up west.

A few simple guesthouses, upmarket hotels and villas dot the coves and beaches making it a peaceful, idyllic setting. The surrounding areas however, offer plenty of attractions to explore: the Hoo-maniya blowhole, the giant Buddha statue and shrines of Wewurukannala, and the ancient rock temples of Mulkirigala are just some. The protected beach at Rekawa is Sri Lanka’s best site for endangered turtles and avid birders must visit Kalametiya Bird Sanctuary, a haven for both migrants and endemics. The plateau of Ussangoda – East of Tangalle, is a barren landscape surrounded by a forested area. Dark red soil and the lack of trees are its distinctive characteristics giving rise to many legends including the theory that the region was hit by an ancient meteor.

From Tangalla the white sands of Medaketiya Beach stretch for more than 3km northeast. A fan of pristine beaches, heritage and history will find this beach a treat. The beaches are sandy with rock formations for waves to splash, these are some best-kept secrets of the island, in this coastal town. Bordering Yala National Park, a wilderness safari is the ideal predecessor for some time at the beach or even the Tangalle lagoon, to cool down. There is also the prison, which was previously a Dutch fort and of course the rock temple at Mulkirigala, to the Kaduwela blowhole, the turtle conservation and many great attractions. However, most tourists enjoy the cool waters of the sea, and indulge in swimming, snorkeling, scuba diving and other water sports. This little town on the southern coast is a true haven.

Twenty kilometers north of Tangalla lies the large rock of Mulkirigala, reminiscent in shape to Sigiriya. The rock houses an impressive series of cave temples dating from the third century, similar to those of Dambulla.

The Bo tree at the Upper Terrace is considered be a shoot from one of the 32 saplings of Anuradhapura Jaya Sri Maga Bodhi planted at the said terrace during the rein of King Devanam Piyatissa. Mulkirigala temple is also considered to be one of the 64 temples constructed by King Kawantissa and was called as 'Muhudu Gira' then which dates back to the 3rd Century BC .

The temples remaining at present belongs to the Kandyan era and the Buddha images and many cave paintings depicts magnificent examples of Kandyan era arts and crafts. Mulkirigala Rock Temple is one of the few 'Raja Maha Vihara' or the 'Temples of the Great Kings' ( of the Kandyan Kingdom) found out of the then Kandyan Kingdom. King Keerthi Sri Rajasinghe (1747 AD) gave his patronage to reconstruct this temple after it being neglected for centuries since the rein of the Parakramabahu the Great.

This peaceful little mangrove swamp can be explored by either canoe or organized trip. By canoe, one may explore the area at leisure and get the benefit of being able to go as you please. it is so peaceful and lovely kayaking through the mangroves - floating past vast array bird including Sea Eagle - lizards , snakes, fish and monitor lizards about as well as monkeys. Have ans early morning star with the sunrise when the birds and other wild life is most active. A great way to start the day!

A beach within a village community, Mawella beach is undoubtedly one of the most beautiful beaches in the Tangalle area. The beach is not too crowded with tourists and locals, so you can relax in peace and quiet and enjoy the sea, the sand and the atmosphere while watching working fish boats adding a sense of authenticity Mawella is where you can relax and revitalize your spirit, away from the daily stresses in a purely tropical environment.

With its beautiful golden sand and palm trees Goyambokka beach isa small secluded beach but definitely not undiscovered. Despite quite a lot of visitors it remains to be a tranquil place for relaxing and swim and a gem for most travelers to Sri Lanka.

Goyambokka is a lovely beach with a few rustic beach bars serving food and drinks, which also offer free sun beds. It has a lovely long beach for walking on with lots of fishing boats to look as you wander along.

The Madunagala hermitage is a beautiful location, situated on and around a rock in the shade of the thick jungle. Consisting of caves where Buddhist monks are in deep meditation the hermitage also comprises ancient pools that aid nature's flow of water.

The temple is situated in the midst of the thick jungle haunted by wild animals. Elephant, bear and leopard prowl the roads after dark, so much so that tourists and pilgrims who come to give alms are told not to leave human settlements after 6.30pm.

The temple is surrounded by outcroppings of rock. The atmosphere is perfect for contemplation and meditation. Visitors could see across to another hilltop Karamagala where monks live in solitude. The monks of Madunagala Vihare retreat into the jungle and meditate in niches cut in the rock. If the monks permit you also can be there for a few days of meditation. 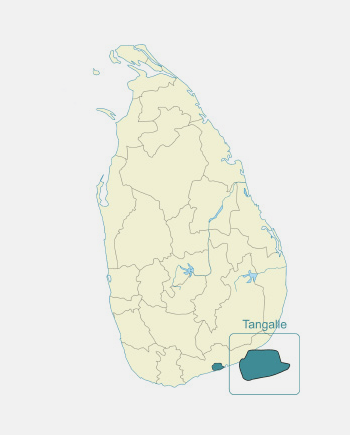