With a distinctive beauty of its own, Mannar on the North western coast comprises an area on mainland as well as Mannar Island – the largest islet in the country.

At the heart of the dry zone, the scenery varies from arid, sandy beaches to scrub jungle, paddy fields to tall Palmyra trees that line the horizon. A dry and barren peninsula, the Mannar Island at its westernmost tip is almost connected to the Dhanuskodi - the easternmost point in Southern India by a reef of corals submerged in the Palk Straits. Known as Adam’s Bridge, it is a chain of limestone shoals and geological evidence suggests it to be a former land connection reportedly passable on foot up to the 15th century until storms deepened the channel. Other attractions include the giant baobab trees, and the ancient fort - built by the Portuguese in 1560, captured by the Dutch in 1658 and rebuilt. While its ramparts and bastions are intact, the interior is largely destroyed. Manner was also renowned in ancient times for pearl fishing. With thousands of migrants flocking in, Mannar is also perfect for bird watching especially for many species of waders and pink Flamingos.

Shrine of Our Lady of Madhu

The Shrine of Our Lady of Madhu in Mannar district of Sri Lanka, is considered as the holiest Catholic shrine in the island and is a well known place of devotion for both Tamil and Sinhalese Catholics. With a history of over 400 years, this shrine acts as a center for pilgrimage and worship for Sri Lankan Catholics.

The church has been a symbol of unity not just between Tamils and Sinhalese, but also between people of different religions, including Buddhists, Hindus and Protestants. Attendance for the August festival at times touched close to a million people before the outbreak of the Sri Lankan Civil War. Situated in the heart of the conflict zone, pilgrimage to this shrine was dramatically affected by the Civil War with the presence of refugee camps around the shrine complex.

Arippu Fort was built by the Portuguese and was handed over to the Dutch in 1658. The small bastion fort is located in Arippu, which is 16 km (9.9 mi) away from Mannar Island. The fort is nearly square in shape, with two bastions.

Robert Knox, English sea captain and famous British prisoner of the Kandyan King Rajasinghe II, and his companion escaped after nineteen years of captivity and reached the Arippu Fort in 1679.

The first British Governor of Ceylon, Frederick North, constructed his official summer residence at the beach front, now known as the Doric and converted the fort into accommodation for the officers, who operated the pearl fisheries in the area. The fort building was subsequently converted to a guest house but was abandoned when the civil war spread to the area.

Mannar Island is a dry and barren peninsula located in the district of Mannar. Though called an islet, it is in fact a peninsula formed in the shape of a tongue. Talaimannar, the westernmost tip of the island, is almost connected to the Dhanuskodi, the easternmost tip of the peninsula of Southern India by a reef of corals submerged in the Palk Straits.

Apart from the thin strip of land that joins the peninsula to the mainland, Mannar Island is also connected by the causeway over the shallow waters forming a 3 km stretch of the A14 Madawachchiya –Talaimannar main road. The small fishing port of Mannar is located on the south-eastern shore of the islet.

Mannar Island is one of the few places in Sri Lanka where Baobab trees thrive in. The name Baobab comes from the Arabic plant name Buhibab, while the scientific name is after the French Botanist M. Adanson (1727–1806). The Arab traders together with their camels also brought Baobab trees and planted them in the hot sandy lands of Mannar. The Baobab tree, which is native to Africa, was brought in for the sole purpose of feeding Arabian Camels.

Baobab is a unique species of trees: the enormous barrel like trunk that taper into the branches is hollow. When the leaves are shed, the dry tree appears as if it is planted upside down. The rough and greyish bark of the tree resembles the hide of an elephant. The fruit of the Baobab tree has been named by Catholics in Mannar as Judas Bag. It is savoured by monkeys, while the fruit contains about 30 seeds.

The village is known for the ancient Buddhist temple Thanthirimale Raja Maha Vihara, which was built in the third century BC with historical value, situated in a nearby rock covered area. The temple and the junction appears to be most important centre in the village.

It is believed that when the Jaya Sri Maha Bodhi was brought from India to Sri Lanka, one night along the way to Anuradhapura, the pot containing the sapling was kept at Thanthirimale, and that one branch that grew from the pot, was planted at that village to remember the incident. Hence, some believe that this may be the first Sri Maha Bhodi plant in Sri Lanka. The Bo Tree is placed on top of large stony layer which may protect the tree up to now.

Mannar Fort, located on Mannar Island, Sri Lanka, was built by Portuguese in 1560. The fort surrendered to the Dutch in 1658, and was rebuilt by the Dutch in 1696. In 1795 the British occupied the fort following the surrender by the Dutch. It is a square shaped fort with four bastions and it’s still in good condition although the building inside the fort have not been properly maintained. It’s located next to the new bridge that connects the mainland with the Mannar Island. The fort is currently occupied by the Sri Lanka Police.

Adam's Bridge (also known as Rama's Bridge or Rama Setu) is a chain of limestone shoals, between Pamban Island (Rameswaram Island), off the southeastern coast of Tamil Nadu, India, and Mannar Island, off the northwestern coast of Sri Lanka.

Geological evidence suggests that this bridge is a former land connection between India and Sri Lanka, made with chain of limestone shoals surrounded by a shallow sea of one to 10 meter depth. The thirty km long bridge, which separates the Gulf of Mannar from the Palk Strait, was reportedly passable on foot up to the 15th century until storms deepened the channel. The Rameshwaram temple records suggest that Rama’s Bridge was completely above sea level until it was destroyed in a cyclone in AD 1480.

The bridge and its surrounding sea was first mentioned in the western worlds in "historical works in the 9th century" by IbnKhordadbeh in his Book of Roads and Kingdoms in 850 AD; referring to it as Set Bandhai or "Bridge of the Sea".

As it’s name suggests, Yodha Wewa (“Yodha” means Giant and “Wewa” means Lake, in Sinhalese) in Mannar is one of the largest tanks in the island. It was built by King Dhatusena (459-477) by damming the Malwatu-oya, later known as Manawatuwewa. The tank is fed by an ancient canal, recently restored, which carries water from the Malwatu Oya river.

Yoda Wewa is situated about 25km southeast of Mannar in the Mannar District in a semi-arid zone. A part of the tank bund is located along the Madawachchiya – Mannar Road. The water from this tank is fed to 162 smaller tanks downstream and irrigates about 11,000 hectares of paddy land.

For almost 3 decades parts of this tank was under Tamil Tiger terrorists and the maintenance was neglected due to security reasons. The area which was farmed with the waters were engulfed by the jungle. But since 2008 restoration work of the tank has already begun. Once the tank is fully restored to carry the full volume of water, this area (known as the rice bowl of the country) will once again live up to its name. 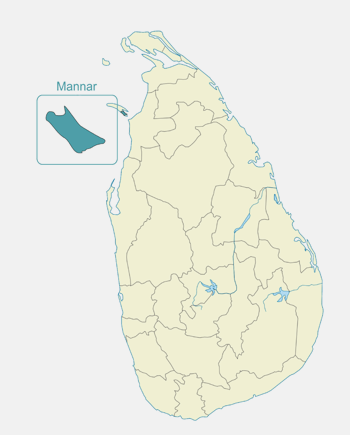